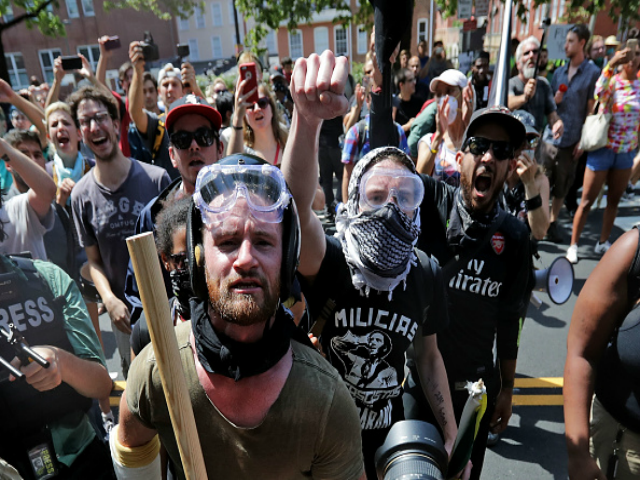 As one would expect, the utterly biased news outlets proclaimed that the planned rallies in San Francisco and Berkely were deemed as “white supremacist” rallies, which was a typical load of Progressive #Resist mule fritters. Now

(LA Times[2]) Citing potential violence, organizers of right-wing rallies this weekend in San Francisco and Berkeley have canceled the events, but officials in both cities were still preparing for clashes between demonstrators and counter-protesters.

Joey Gibson, founder of the Patriot Prayer group, had planned to hold a “Freedom Rally” at Crissy Field Beach in San Francisco. He told The Times last week that his group was not “white supremacist” but that he feared extreme or racist figures might try to co-opt his event, a concern shared by experts who track hate groups.

No police officers were allowed to have the day off. The obvious common theme here is that Democrat Party voters would show up and create trouble.

After the cancellation of Saturday’s event, focus shifted to Sunday’s “No to Marxism in America” rally in Berkeley, which has been home to a number of political clashes this year. Violent protests on the UC Berkeley campus shut down an appearance by Milo Yiannopoulos in February, and subsequent demonstrations in support of Trump collapsed into roving street fights.

As of Saturday morning, the event’s Facebook page listed the rally as canceled. The organizer, Amber Cummings, said in a Facebook message to The Times[3] Friday that she was “asking that no one come to my event.”

Cummings is a transgendered Trump support[4]. Here’s the beginning of her message[5], read the rest at the links

To the press and to the people,

I am releasing this statement to inform the people that I am asking that no one come to my event “No to Marxism in America” Being held in Berkeley California at 1pm August 27th at MLK Park. In light of all the violent threats taking place and the past history of police being ordered to stand down at Prior Rallies in Berkeley this gives me grave concerns for the safety of the people attending my event. My event seems to have lost its meaning in the press and the intent seems to not be getting out there. My event is to speak out against the political violence happening to people who do not agree with Marxist ideology and I wanted to point out that people are being attacked In a ruthless violent manor by thugs like Antifa and BAMN.

This all needs to stop and we need the violence to come to an end. I have concerns that Antifa and BAMN will attack my people attending the event and in good conscience I cannot risk this happening. I am asking the people to not attend this event Sunday and I apologize for this. I just feel that terrorist groups like Antifa and BAMN are trying to incite riots and violence I will not let them succeed.

That being said I stress DO NOT ATTEND THIS RALLY PLEASE. This rally will take place, but it will be me alone attending, no one else please. The city of Berkeley will not allow us protective gear to protect ourselves from objects thrown at our people like and this is one if my many concerns. Past experience shows that Antifa has thrown rocks, m80 explosives, and many other dangerous items that could kill a person and without some protective gear that might happen and that concerns me. Antifa is people that do not care who they attack. They attack our veterans, our police, elderly, and they do not care who they attack and act like violent terrorists and I cannot and will not allow innocent people to be hurt or subjected to this violence. People come to rallies in these cities with the expectation they will be safe and the police will be allowed to do there jobs. In the past that has not been so and police were ordered to stand down.

Cummings is giving in to the Heckler’s Veto, but, then, the threat of violence from Leftist forces is not hypothetical nor academic, especially in a place like Berkeley (which lauds itself about being peaceful. Sic), and especially when the police like to hang back. This is Liberal World.