Now California to Allow Illegal Immigrants to Apply for Free Obamacare At YOUR Expense, America 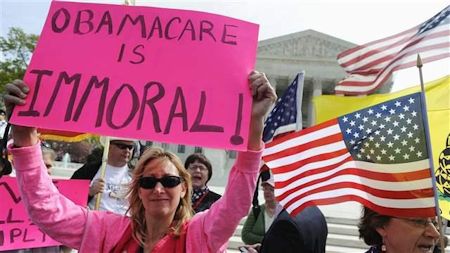 That’s right, Democrats in Calif. now want to allow illegals to join Obamacare and to get subsidies or even free healthcare courtesy of YOU the taxpayer.

Supporters say the California proposal, which would need federal approval and couldn’t start until 2017, is the next logical step in expanding health insurance to a population that was intentionally excluded from the president’s health-care law. But uniting the two highly combustible issues of Obamacare and immigration could reignite a fierce health-care reform controversy.

There’s no guarantee the California plan still winding through the state’s legislature will succeed, even with Democrats in control of the statehouse, the governor’s mansion and the White House. California Gov. Jerry Brown isn’t commenting on the legislation, which has been approved by the state Senate but not by the Assembly. But just last month, Brown agreed to spend millions in state dollars to provide health care to undocumented children, mirroring similar efforts in a handful of other liberal states.

For the Obama administration, the California effort could mark the return of a sore point in the early days of the Obamacare debate. Republicans never trusted Democrats’ repeated assurances while the law was being drafted that the Affordable Care Act wouldn’t cover undocumented immigrants. That built up to Rep. Joe Wilson’s infamous “You lie!” moment, when the South Carolina Republican interrupted President Barack Obama’s 2009 health care address to Congress.

Joe Wilson was right. They lied. Democrats ALWAYS intended to give illegals these freebies at YOUR expense, America.