Earlier today we wrote of a Starbucks in Philadelphia that got in trouble for refusing to allow a police office to use the store’s restroom. Now we get yet another story of a fast food joint revealing anti-cop sentiment with a Whataburger in Texas telling some police they they won’t serve them. 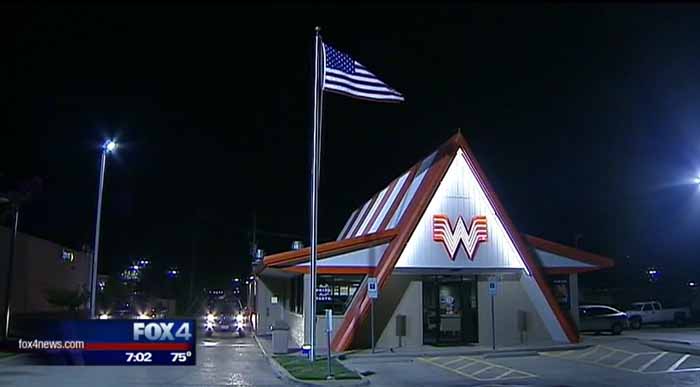 All this is a result of punk kids behind the counter at these places who are taken with the criminal Black Lives Matter movement and think it is OK to denounce the police.

Anyway, this time we find the anti-cop sentiment[1] in Lweisville, Texas:

According to a local Fox affiliate, officers Michael Magovern and Cameron Beckham stopped by the location while working night shifts at a nearby construction site. But before they could order, the man working the counter told them, “We don’t serve police officers.”

Given that Whataburger is a Texas staple– and Texas is not exactly a hotspot of anti-police furor– the incident received widespread coverage in local media and flooded Whataburger’s Facebook with angry comments. “This is my favorite place to eat and to hear that one of your establishments refused service to an officer is appalling,” reads one complaint. “I hope y’all can make it right…”

The company issued a statement in response: “This is 100% not what we stand for at Whataburger and it would never be acceptable to refuse service to a police officer. We want to address this as soon as possible with any parties involved so we can reach out and make this right.”

This is happening way too much.