Making some parents furious, a Pine Bush, New York high school courted controversy by teaching kids to recite our national Pledge of Allegiance in Arabic even changing “one nation under god” to “one nation under Allah.” 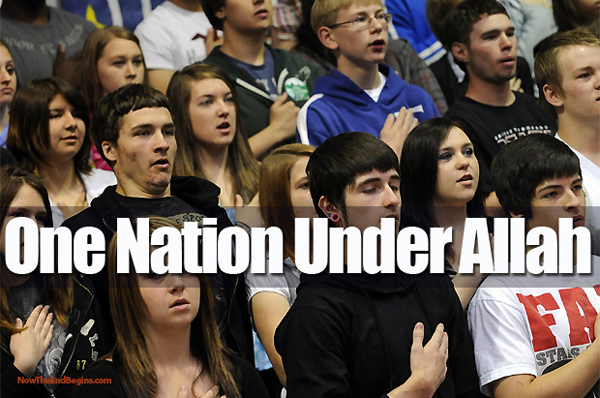 Shockingly–or maybe not so, considering how left-wing our education establishment is–the school’s president of the student assembly and senior class president, Andrew Zink, insisted that saying the pledge in Arabic is “the right thing to do.”

This is what our kids are being taught, folks.

Unsurprisingly, this same school was already mired in a scandal when it allowed rampant anti-Semitism to go about unchecked. The school was even sued for its failure to stop the blatant hate against Jews. And now it is forcing kids to say the Pledge in Arabic[1]? Yeah. Not surprising at all.

An effort to celebrate national Foreign Language Week by reading the Pledge of Allegiance in Arabic Wednesday has polarized Pine Bush High School into angry factions.

The morning’s regularly scheduled announcements included the Arabic reading of the pledge. According to students, the announcement was greeted by catcalls and angry denunciations in classrooms throughout the school by students who felt the reading was inappropriate.

The reading became the subject of angry talk throughout the school and a cascade of tweets both from students who criticized the reading and those who supported it.

THIS is your government schools, folks.