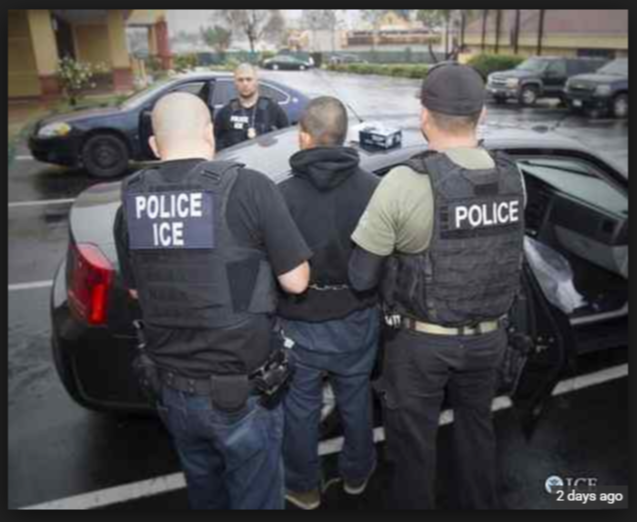 Why? Because Democrats are more worried about people who are unlawfully present in the United States, and, in particular, the ones ICE targets, who are mostly those who have committed further crimes, than they are about those who are lawfully present

Law would bar immigration agents from having ‘police’ on uniforms[2]

Federal immigration officers would be barred from wearing the word “police” on their uniforms under new legislation to help undocumented immigrants distinguish between the NYPD and deportation agents.

“Not only are ICE raids an unconscionable attack on our most vulnerable communities, any attempt by immigration officers to deceivingly pose as local police ought to be prohibited,” Velázquez said in a statement.

Valazquez is federal representative, so, she is attempting to make this law for all the land. Quite frankly, Republicans should allow her to bring this to the House floor for debate and a vote, in order to put Democrats on record as supporting illegal alien criminals. Ones like these

(Washington Examiner[3]) U.S. Immigration and Customs Enforcement officers arrested 82 illegal immigrants in the Washington, D.C., metropolitan area as part of in a five-day sting that concluded March 30, according to a press release[4] Wednesday.

The standard enforcement operation targeted criminal aliens, illegal re-entrants and immigration fugitives. Virginia topped Maryland and the District of Columbia with the highest number of arrests at 79. D.C. followed with two arrests, while only one Maryland resident was taken into custody.

About 80 percent of the arrestees have been convicted of criminal offenses in addition to illegally residing in the country, including crimes like armed robbery, larceny and drug distribution. The other 14 people were seized for ties to the MS-13 gang, outstanding deportation orders, overstaying visas, being wanted by a foreign law enforcement organization, being a verified human rights violator.

The illegals were from 26 different countries, and not just Mexico and Latin American ones. They were also from China, Iran, and Sudan, among others. Even New Zealand was represented. ICE targeted other areas of the country, such as in Texas[5].

Meanwhile, the 3rd edition[6] of the Declined Detainer Outcome Report has been released, and features the usual suspects refusing immigration holds on people who have committed serious crimes. Why are Democrats defending criminals?