First off, if this is all[1] the New York Times could dredge up on Rubio, that’s pathetic. I mean, who really gives a flying crap about traffic tickets? Second, ‘hypocrite’ is a term of endearment when describing the Gray Lady. Their bias is showing once again. In an ironic twist, Obama had 17 tickets (that number sounds oddly familiar) and he took over 20 years to pay off the $375 he owed. In a weird coincidence, he paid them off just before he ran for office. Imagine that.

Even though Senator Marco Rubio was attacked for his traffic violations[2] in the pages of the New York Times on Friday, it turns out that President Obama has just as questionable a driving record.

Rubio and his wife may have received 17 traffic violations over the course of eighteen years, but their violations were paid in a timely manner. On the other hand, while Obama may have paid for his parking tickets eventually, it still took him seventeen years to do it.

Democratic presidential candidate Barack Obama[4] got more than an education when he attended Harvard Law School in the late 1980s. He also got a healthy stack of parking tickets, most of which he never paid.

The Illinois Senator shelled out $375 in January _ two weeks before he officially launched his presidential campaign _ to finally pay for 15 outstanding parking tickets and their associated late fees.

Obama received 17 parking tickets in Cambridge between 1988 and 1991, mostly for parking in a bus stop, parking without a resident permit and failing to pay the meter, records from the Cambridge Traffic, Parking and Transportation office show. 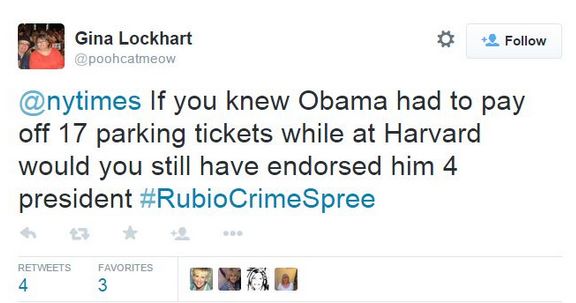 Then, there was this snarky approach:

Interestingly enough, Jen Psaki, then a spokesperson for Obama’s 2008 presidential campaign, ignored the issue of Obama’s unpaid tickets when they were reported on.

If we’re going to judge politicians by their driving record, it seems only fair that we hold all elected officials to the same standard. However, we’re probably not going to see the Times with a story on Obama’s traffic violations anytime soon.

The New York Times can’t seem to find any substantive dirt on Rubio, so they make a big deal out of some traffic tickets. Geez… I guess they should write up most of America. Still no word not only on Obama’s driving record, but his Marxist/communist past either. Hmmm. Guess that’s just not newsworthy. Because you know, hobnobbing with celebrities and playing golf is front page news – while schmoozing with the Muslim Brotherhood and cuddling with every major enemy we have is just boring. Rubio laughed at the coverage of his tickets and I don’t blame him – if this is the best the sycophant media can do against the Republican bench for president, then they are in deep Kimchi.