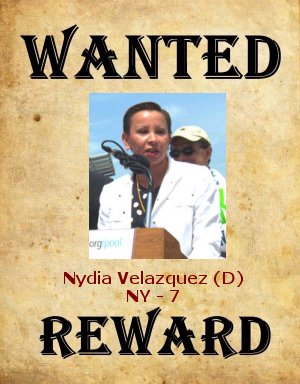 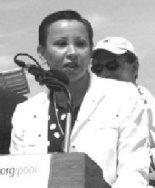 In 1983, Velazquez was appointed Special Assistant to Congressman Edolphus Towns (D-Brooklyn). One year later, she became the first Latina to serve on the New York City Council. In 1992, Velazquez was elected to the House of Representatives to represent New York’s 12th District.

By 1986, VelÃ¡zquez served as the Director of the Department of Puerto Rican Community Affairs in the United States.

As campaign manager for Nydia Velazquez in 1992, Karen Ackerman ran a successful campaign against incumbent Steven Solarz for the newly created Congressional seat in the 12th District of New York. Moving to Washington, D.C. after the race, Ackerman served as Chief of Staff for Congresswoman Velazquez until 1996.

Ackerman had once been active with the Communist Party USA (CPUSA) youth wing, the Young Workers Liberation League and in 1970, was a member of the second Venceremos Brigade to Cuba, where she cut sugar cane for Castro.

In her speech to the Rainbow Coalition Leadership Summit, February 19, 1993, Nydia Velazquez paid tribute to the late Jesus Colon, a garment worker, CPUSA member and author of: “A Puerto Rican in New York.”

Said Velasquez, “the plight of the America today, particularly the nation’s people of color, reminds me of the stories of Jesus Colon, a writer, who with piercing accuracy, poignantly chronicled the struggles of early Puerto Rican migrants in this country. Sixty years after the experiences of Colon, I would arrive in New York, and like him, would be shocked at the unbearable conditions of the people. I too would be subject to harsh and threatening words, merely for the olive tone of my skin, or the sound of my name. I too would feel the sting of discrimination.”

Article Re-Printed in the People’s World

Nydia Velazquez has long-term ties to Asian Americans for Equality (AAFE), a powerful and very wealthy (thanks to U.S. taxpayers) Chinatown, New York based organization, founded by former members of the pro-Communist China and North Korean Communist Workers Party (CWP).

“Rebuilding and revitalizing Lower Manhattan is one of my top priorities,” said Congresswoman Nydia Velazquez. “Increased home ownership has been shown to promote community development through increased neighborhood involvement and investment in local businesses. Freddie Mac’s generous contribution is an important step towards this goal and will help place more local residents on the road to home ownership.”

On November 25, 2009, at a press conference in Chinatown, AAFE announced it has become a charter member of NeighborWorks America. A non-profit created by Congress. On hand to celebrate the occasion, were several elected officials including Rep. Nydia Velazquez, AAFE Executive Director Chris Kui and Margaret Chin, District 1’s new city council member, former AAFE President and one time CWP member.

Rep. Velazquez offered her congratulations to AAFE. “By joining forces with NeighborWorks, AAFE will have additional funding and support for their efforts to create equal opportunities for all New Yorkers. I am committed to working with AAFE to address the shortage of affordable housing, increase financial literacy and improve lending practices. With unemployment rising above 10 percent and families struggling to make ends meet, this help is needed in New York City now more than ever.”

Velazquez has been a past recipient of the annual AAFE award, in her own right.

In 1999, eleven imprisoned Puerto Rican Marxist independence fighters were released on parole from long prison terms in the U.S.

The clemency offers came after a long campaign that saw 75,000 people sign a petition in Puerto Rico and the U.S. The campaign, led by the Pro-Human Rights Committee of Puerto Rico, involved such activists as Coretta Scott King, Rev. Jesse Jackson, Bishop Desmond Tutu, Rigoberta Menchu and Dr. Aaron Tolen, President of the World Council of Churches.

United for Peace and Justice

Nydia Velazquez was listed as an endorser of the January 27, 2007, “Act Now to End the War” event, organized by Institute for Policy Studies partner organization, United for Peace & Justice. Also endorsing the event was Democratic Socialists of America, Socialist Party USA, Committees of Correspondence for Democracy & Socialism, National Lawyers Guild, National Organization for Women and the Communist Party USA. At the event, peace activists “converge[d] from all around the country in Washington, D.C. to send a strong, clear message to Congress and the Bush Administration: ‘The people of this country want the war and occupation in Iraq to end and we want the troops brought home now!’”

Circa 2007, Nydia Velazquez — “Congressista,” was a member of the United States “Regional Workshop” of the former Soviet front Women’s International Democratic Federation.