During a recent fundraiser, President Obama told an audience that he and the Democrats don’t want to tax all business out of business. He also said he doesn’t believe in “top down” government. 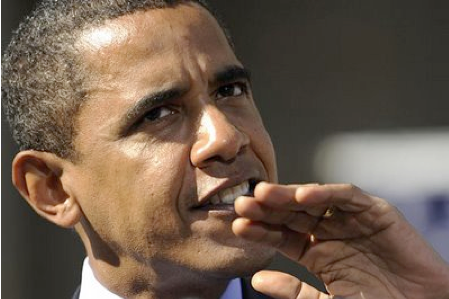 The President made these comments[2] at a private residence in Palo Alto, California during a Democratic Senatorial campaign fundraiser in the first week of June.

“I know that there are a few Republicans here in the audience,” he said to those gathered. “If you talk to us, it turns out, you know, we’re pretty common-sense folks.”

Barack Obama has made this claim many times on the hustings, but his actions have often been at odds with this campaign rhetoric.

For instance, in 2007 Obama ran for the White House promising that electric rates would “necessarily skyrocket” because of the stringent new pollution regulations–such as cap and trade–he planned to implement. After he took office that pledge of higher electric rates came to fruition.

Not only that, but due to his use of the EPA to push his policies power plants across the country began to shut down due to an avalanche of regulations[3] they couldn’t possibly meet.

At the early June fundraiser Obama may have claimed he wanted a “light touch” with regulations, but he most certainly has not made good on that claim as president.

As the Heritage Foundation noted in May, Obama’s first term was a veritable flood of new regulations[4].

Heritage found that upwards to $70 billion in new regulatory costs have burdened the already delicate economy with 131 new major regulations being issued from Washington through Obama’s regulatory schemes.

Far from a “light touch,” Heritage found that only two rules in 2012 decreased burdens on the business sector.

In fact, these major regulatory changes serve as another refutation of the President’s fundraiser claims.

“We don’t think that top-down solutions are the right way to go,” Obama claimed at the Palo Alto fundraiser. But his administration has had a woeful penchant for implementing new regulations without even allowing opportunities for public comment.

Heritage discovered that the largest numbers of major rules that were issued without comment were issued in 2009 and 2010 (34 in each year), the first two years of the Obama Administration.