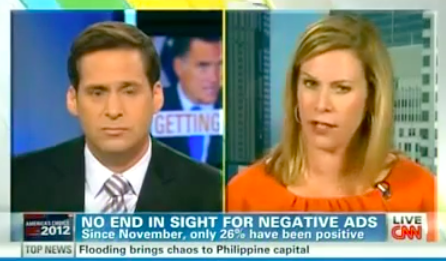 Obama’s Deputy Campaign Manager,Stephanie Cutter, refused to condemn the slanderous Priorities USA ad that insinuated that Mitt Romney killed a steel-worker’s wife. : Instead, she reiterated a pre-written legal statement about how the Obama campaign can’t coordinate with Priorities… blah blah blah. She also said that she didn’t know the facts surrounding when Joe Soptic’s wife got sick or when she died, but she does know: the dynamics between Mitt Romney and GS Steel. : Apparently, the Obama campaign continues the lie that Romney personally closed the plant in 2001 leaving Joe without a job and health care. : On the other hand, Romney walked away with a nice profit, but it’s funny since he left Bain in 1999!

While we’re talking about Soptic’s dead wife, since he whored her out for political gain, let us hash out the facts. : Soptic’s wife died in 2006! : Furthermore[2], “CNN’s Brianna Keilar and Wolf Blitzer did some fact checking and found that the woman in the ad had insurance after her husband, Joe Soptic, lost his job at GST Steel when it closed in 2001 – two years after Romney left Bain. That fact was left out of the pro-Obama ad.: Keilar said Tuesday that Soptic’s wife had insurance until 2002 or 2003 when an injury forced her to leave her job.”

Even Politico called out Priorities USA on the gross misinformation[3]:

In the case of this particularly jarring super PAC ad, it may also be relevant that Soptic’s wife died in 2006, years after the GST factory closed down.

A 2006 story in the Kansas City Star reported the death of Ranae Soptic, a former champion roller skater: “Soptic went to the hospital for pneumonia, but doctors found signs of very advanced cancer, and she died two weeks later on June 22.”

I asked Priorities USA strategist Bill Burton to explain the connection between Romney, Bain and a cancer fatality that happened near the end of Romney’s tenure as governor of Massachusetts. The lapse in time between the plant closing and Soptic’s death doesn’t mean the ad is invalid, but it raises questions about the cause and effect relationship here.

What are they smoking?

Allahpundit of HotAir posted yesterday that:[4]

Knowing what we know now about the timeline of all this, what’s left of the accusation in the original smear ad? What is it, precisely, that Bain is being faulted for doing or not doing? They shouldn’t have closed down the plant because … it was unfair to expect the workers who were laid off to ever find new jobs with insurance? It was negligent not to predict that some workers’ wives might get laid off too and wouldn’t find a new job: for years: before they became ill? There appears to be no actual policy or business critique here. It’s just a string of events spread over five whole years, with certain key data omitted, and you’re supposed to infer causation without really being told why or how. This is what the Unicorn Prince has come to after promising four years ago to heal America or whatever. Perfect.