Obama Lies: Almost No Instances of People Going to Vote in Somebody Else’s Name [Video]

I’d be laughing and rolling on the floor over this blatant, abhorrent lie if it wasn’t a life and death issue[1] for the United States. Obama is publicly condoning voter fraud, claiming there are almost no instances of people going to vote in somebody else’s name. And he said that with a straight face. There seem to be millions of dead voters and in certain districts more than 100% who voted for this dishonest Marxist. Not to mention the millions of illegal aliens and Muslim refugees Obama has brought here to change the voting demographic and ensure Marxist rule. Of course he’d want to do away with voter ID – he wants illegals, criminals, the dead and the non-existent to vote… he wants more than one vote per voter as well. It depends exactly on what your definition of ‘fraud’ is. Obama’s is flexible. 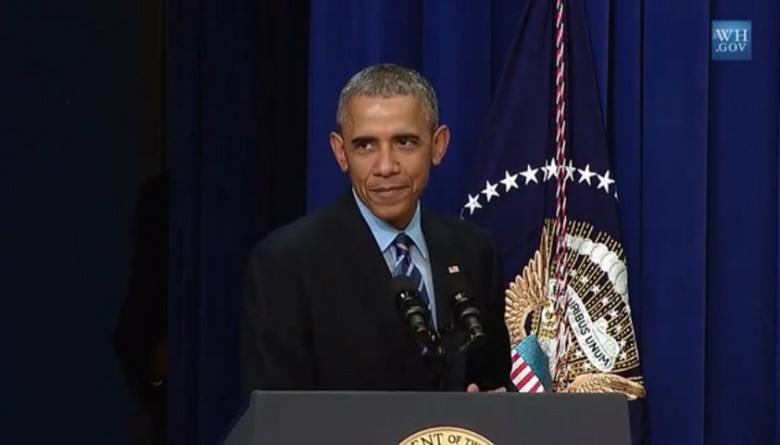 The President gave a speech at the White House, marking the 50th anniversary o the Voting Rights Act in which he informed people that requiring photo id to vote is wrong because voter fraud barely happens in this country.

Obama drew this conclusion from the cherry-picked data telling how many times the government actually prosecuted people for this crime. Considering how this administration refuses to pursue these cases in most instances immediately makes these statistics suspect.

At the state levels, we’ve got some outstanding members of state legislatures–California, Florida–who have been championing mechanisms to get more people voting: Early voting, online registration.

But sadly, too many states are making it harder for folks to vote–instituting photo ID laws that on the surface sound good. If you poll the average American, they’ll say, yes, you should have to show your photo ID.

But, in practice, it turns out that for seniors and for poorer folks, that’s not always easy to do. And by the way, it doesn’t actually address a real problem because there are almost no instances of people going to vote in somebody else’s name. It’s just not a–it turns out it’s just not a common crime.

Once again, Obama hides behind the elderly and poor as his excuse for breaking the law. It’s sickening. Voter fraud is rampant in this country and it has gotten exponentially worse with each passing election over the last couple of elections. I’m not surprised. Those who are stacking the vote have little to fear from the DOJ or Obama, as long as it is in their favor. We have to stop this massive voter fraud or our elections will virtually mean about as much as the statistics coming out of the government do, or be as trustworthy as what you see in the stock market. Our right to vote is being stripped from us and destroyed by Progressive Marxists. Speaking as an IT person, please get rid of computerized voting in its current form and don’t even think about voting on the web. It’s way too easily hacked and manipulated. When it comes to having your vote count, old school is the best way to go in today’s politically charged climate and the surest way to save our country.