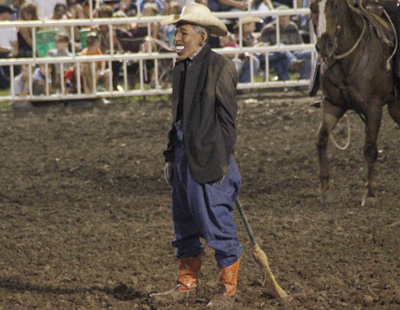 Don’t make fun of king Obama. If you do your life will be destroyed. That is the message that the Missouri State Fair is sending by the banning for life of a rodeo clown that used an Obama mask during a recent performance.

Of course, the crowd had a great time with the stunt as can be seen in a video of the event…

The incident occurred on August 10 at the Missouri State Fair where Rodeo clown Tuffy Gessling made a bunch of Obama jokes with a dummy figure of Obama propped up by a broom which was being used as a target for the rodeo bulls. But soon scolds on the Internet went wild attacking the clown as “racist.”

Jeff Mazur, an Executive Director for AFSCME, a left-wing government workers union, and an operative in Democrat Governor Jay Nixon’s administration, wasn’t amused, though and he took to Twitter to immediately attack the rodeo for the Obama joke. (See his Tweet below)

After Mazur and many other liberals on the Internet went stupid over the incident, the clown quickly said that he did not mean to offend anyone with his joking on Obama, but he was banned for life anyway.

The rodeo announcer also resigned his position with the State Fair.

But this use by rodeo clowns of masks of presidents and other famous personalities is nothing new at all.

For instance, a black rodeo clown named Leon Coffee[3] has used a Hillary Clinton mask in performances in the past. 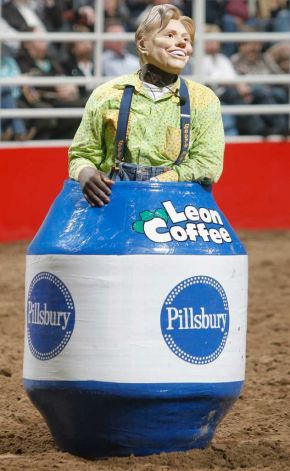 And back in 1994 some rodeo clowns in Arkansas used a dummy with a George H.W. Bush mask[4] on it as a foil for the bulls to smack around. 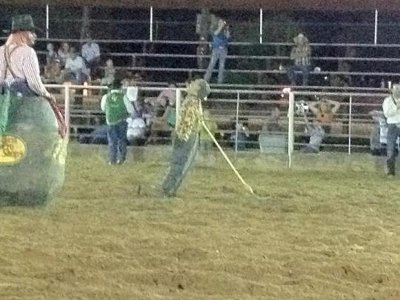 Masks of George W. Bush and Ronald Reagan have also been used in rodeo performances.

This is all an idiotic over reaction that shows that, once again, liberals treat Obama like a god that cannot be criticized or made fun of.