It’s a Marxist dog and pony show.[1] The dust up between Schumer and Obama is political theater. Schumer can take a faux strong stand against Iran (as strong as a Liberal can muster) and tell Jewish voters he is for Israel and against the Iranian Mullahs and nuclear weapons. Obama and the Democrats will make false threats against Schumer and feign outrage. I personally believe this means Obama feels he has the votes to ram this atrocity through. If not, he’ll veto it. Even if Congress overrides the veto (which they won’t), Obama has indicated that Congress be damned – he’ll implement this ‘agreement’ anyway. Don’t be fooled by these false moves by Schumer. Remember, he had elderly Jews protesting the Iran deal arrested in front of his office. He disparaged and ridiculed those standing against the deal. Schumer is thoroughly evil and reprehensible. This is simply cover for Schumer and is meant to placate the masses. 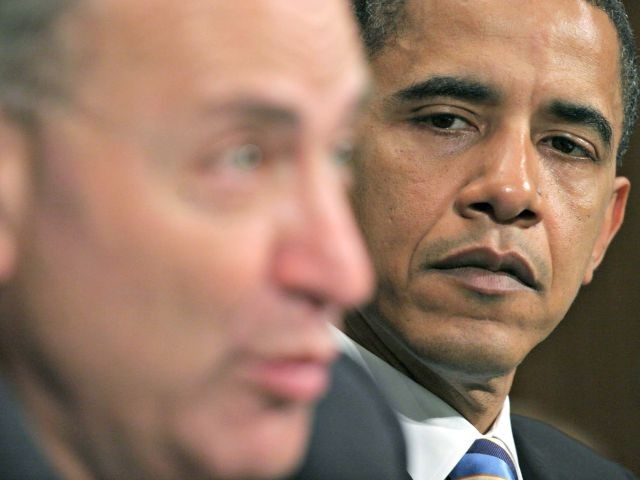 President Obama personally leaked news that Senator Chuck Schumer had decided to oppose his Iran deal, even after Schumer personally asked the President not to mention it until he could make an announcement Friday.

During last night’s widely-viewed GOP debate, word began to circulate[3] that Sen. Schumer had decided to oppose President Obama’s nuclear deal with Iran. The leak appeared timed to make sure the high-level Democratic defection–Schumer is the 3rd highest ranking Democrat in Congress–got as little attention as possible.

A story at Politico confirms[4] the leak was in fact timed for minimum impact, but not by Schumer himself. According to an unnamed source familiar with Schumer’s decision, the Senator called President Obama Thursday afternoon to say he had decided to oppose the deal. Schumer asked the President not to mention his decision publicly until he could make a formal announcement on Friday. Politico’s source was careful to emphasize that Schumer told no one else about his decision, meaning only President Obama himself could have made the decision to leak the story to the press.

After word leaked out, Sen. Schumer issued a lengthy statement[5] about his opposition to the deal on his website. The statement breaks his opposition into three parts. He writes that he finds the arguments for the deal over the first 10-years “plausible” but says the inspections regime has “serious weaknesses” and that the snap back of sanctions process is “cumbersome.” In addition, Schumer believes that after 10-years Iran will have a nuclear program approved by the United States. Finally, Schumer considers the non-nuclear parts of the deal and concludes, “When it comes to the non-nuclear aspects of the deal, I think there is a strong case that we are better off without an agreement than with one.”

Congress is expected to vote against the deal when they return from the August recess. However, that decision can be vetoed by the President. Congress needs a 2/3 vote to override that expected veto. That means the President needs just 34 Senators to take his side. So far he has at least[6] twelve.

But as a high ranking Democrat in line to become the next Senate leader of his party, Schumer’s defection has the potential to weaken the resolve of other Democrats. Rep. Eliot Engel (D-NY) announced his opposition[7] to the deal last night, shortly after word of Schumer’s decision broke. For this reason, the White House had urged Schumer to avoid announcing his decision until the very end of the process, or at least after enough Senators had declared themselves to make it a non-issue.

The spin coming out of the White House[8] now is that Schumer’s defection is a clear signal that a win for their side is inevitable. The thinking goes that an insider like Schumer wouldn’t really put Obama’s foreign policy legacy at risk, therefore his planned Friday announcement must be a signal that the votes are there to prevent a veto override vote without him. As Politico frames it, “Bad news is being taken as almost good news at the White House.”

Contradicting this claim is the fact that the White House seemed to be expressing some anger at Schumer earlier in the day. White House spokesman Josh Earnest suggested Friday that Schumer’s defection could become an obstacle to his becoming Democratic leader after Sen. Harry Reid (D-NV) leaves the Senate. Other White House surrogates made similar noises.

As for Obama leaking the news about Schumer… timing is everything. Obama did that to distract from the Republican debate, not so much to minimize Schumer’s overt ship-jumping move. It was planned. The Democrats are for the most part in lockstep over Iran and the furtherance of the destruction of America and the ushering in of World War III. I think Obama is absolutely confident of the outcome here. He’s just that wickedly arrogant. This time I believe Politico, “Bad news is being taken as almost good news at the White House.” All Marxists hail the next Senate Leader, Herr Schumer.