Even as liberals whine today that Amtrak isn’t getting enough of our tax dollars, Judicial Watch is reporting that Obama is throwing $2 million in tax dollars into free Immigration lawyers for illegal alien kids. 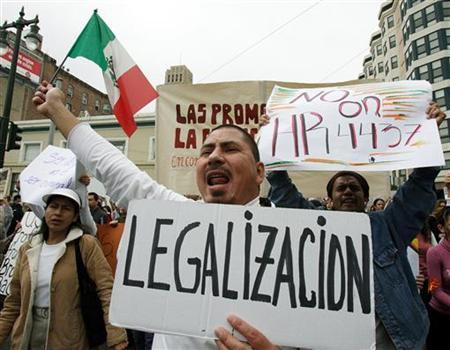 Washington watchdog group Judicial Watch looked into how much free legal representation that Obama is giving away[1] and came up with over $2 million this year so far.

As if it weren’t infuriating enough that American taxpayers are being forced to house, feed, medically treat and educate the never-ending influx of illegal immigrant minors, the Obama administration is also doling out millions of dollars to provide them with free legal representation.

…So the administration is spending our tax dollars to hire attorneys for the tens of thousands of illegal immigrant minors, mostly from Central America, that have entered the U.S. through Mexico in the last few months. Initially, the government labeled them Unaccompanied Alien Children (UAC) but the term was evidently offensive and not politically correct enough for the powerful open borders movement so last month the administration renamed them Central American Minors (CAM). The name change was part of a new refugee/parole that offers a free one-way flight to the U.S. from El Salvador, Guatemala or Honduras to avoid the treacherous process of entering the U.S. illegally through the southern border. The program includes “resettlement assistance” and permanent residency.

But many of the thousands who entered through Mexico on foot prior to Obama’s refugee/parole initiative still face immigration court proceedings and most don’t have lawyers. That’s why the administration is investing $2 million to hire attorneys for the new arrivals. The money will flow through a special program, Justice AmeriCorps, launched by the Department of Justice (DOJ) Executive Office for Immigration Review (EOIR) last summer. “The purpose of the justice AmeriCorps grant funding is to improve the efficient and effective adjudication of immigration court proceedings involving certain unaccompanied children,” according to the grant announcement. “Grants awarded in response to this Notice will enable grantees to enroll lawyers and paralegals to serve as AmeriCorps members providing direct legal representation and other legal services to certain unaccompanied children. The program will also help identify unaccompanied children who have been victims of human trafficking or abuse to assist in the investigation and prosecution of those who perpetrate such crimes on those children.”

Maybe we could have spent those wasted millions on Amtrak, Huh?