Obama is at it again, in his hunt to drive up all our energy costs. This time he is introducing yet another avalanche of regulations to destroy the coal industry, in an effort, he says, to save the planet from “global warming.” 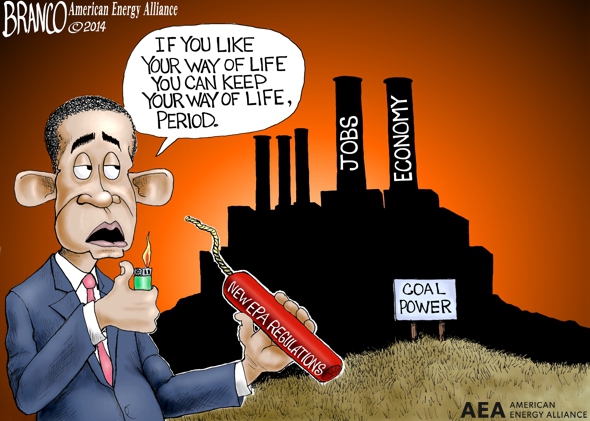 Many complain that the technology doesn’t even yet exist to help coal plants reach the harsh goals that Obama has set. But Obama doesn’t care about that. His goal isn’t to “clean up” the coal industry. It is Obama’s goal to destroy the coal industry[1]. He knows that his goals are impossible to meet. That is the POINT of the rules!

The rules are the final, tougher versions of proposed regulations that the Environmental Protection Agency announced in 2012 and 2014. If they withstand the expected legal challenges, the regulations will set in motion sweeping policy changes that could shut down hundreds of coal-fired power plants, freeze construction of new coal plants and create a boom in the production of wind and solar power and other renewable energy sources.

As the president came to see the fight against climate change as central to his legacy, as important as the Affordable Care Act, he moved to strengthen the energy proposals, advisers said. The health law became the dominant political issue of the 2010 congressional elections and faced dozens of legislative assaults before surviving two Supreme Court challenges largely intact.

“Climate change is not a problem for another generation, not anymore,” Mr. Obama said in a video posted on Facebook at midnight Saturday. He called the new rules “the biggest, most important step we’ve ever taken to combat climate change.”

Remember, Obama told us he intended to do this way back in 2007. He warned the nation that voting for him meant that our energy costs would “necessarily skyrocket.”

Obama wants to destroy an entire industry, put millions out of work, and make all our electric rates skyrocket.