Once again Obama is caught endangering our country with his plan to import and legalize millions of illegal immigrants, many of them criminals. 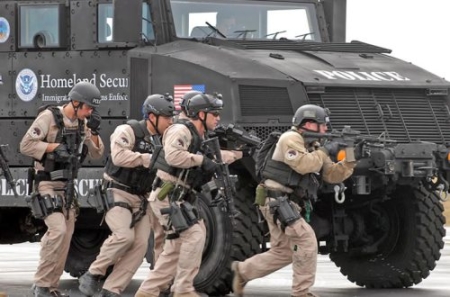 As Washington watchdog group Judicial Watch notes[1], “The monstrous agency created after 9/11 to protect the United States from more terrorist attacks instead compromises national security by failing to track how many unauthorized foreigners–some felons in their native country–it refuses to prosecute under President Obama’s broad amnesty initiative.”

One of the president’s many tools to reward illegal immigrants with amnesty is a measure known as prosecutorial discretion, which allows federal agencies to decide to what degree they enforce certain laws against particular individuals. For years the system has spared a myriad of illegal aliens from removal by authorizing—and encouraging—low-level field officers to block deportations by using an outrageously broad list of exemptions. Under prosecutorial discretion guidelines issued in 2011, droves of illegal aliens have been allowed to stay in the country, but no one really knows the exact amount.

That’s because, unbelievably, the Department of Homeland Security (DHS) doesn’t bother keeping track of the illegal immigrants it has failed to prosecute under the directive. In fact, the agency doesn’t even have a data-gathering system in place to document when agents exercise prosecutorial discretion, according to a report made public this month by the DHS Office of Inspector General (OIG). This could create a national security risk, the agency watchdog writes, further stating that DHS “may be missing opportunities to strengthen its ability to remove aliens who pose a threat to national security and public safety.”

It gets better. The OIG reveals that Immigration and Customs Enforcement (ICE) agents admit that their agency regularly grants illegal immigrants prosecutorial discretion without bothering to access criminal records in the country of origin. “As a result, aliens convicted of or wanted for a felony committed in their home country, but not convicted of a felony or significant misdemeanor in the United States may not be identified as a DHS enforcement priority,” the report states. It gets even scarier. ICE officials say field personnel don’t always record their use of prosecutorial discretion because they exercise it daily and it would be “too time consuming to record every occurrence.”

Obama’s DHS has failed to keep adequate records and has no idea who the over 600,000 illegals are who have already received amnesty.

“Not only are President Obama’s unilaterally-created immigration policies and programs unconstitutional, their implementation has proved to needlessly place Americans and our country at risk,” Virginia congressman Bob Goodlatte said