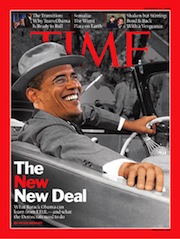 Remember when Barack Hussein Obama first became president and the left-wing Old Media universally indulged the claim that he was “just like FDR[1]“? Of late the Old Media has backed off that hyperbolic statement, but at least in a single incident, Obama has proven indeed to be just like FDR. The similarity entails laws about which the two presidents lied to the public in order to sell them. And in both instances, the truth only came out in court.

For FDR it was Social Security. The Roosevelt Administration sold Social Security as an “insurance” program when it began to push for the policy. The truth is, of course, that Social security and its unemployment plan adjunct is in no way an insurance program. It is welfare pure and simple.

But FDR sold it as “insurance” anyway. In 1936, for instance, FDR sternly told an audience[2] in Pennsylvania that it was an insurance program.

Social Security is not insurance and neither is the federal unemployment program. Insurance is based on premiums paid and figured on actuarial information like health, personal history, life span expectations, age, population and other factors. Neither Soc. Sec. nor unemployment payments are based on such data. Taxes are not like premiums at all. Further that money is not, as FDR claimed, “held by the government solely for the benefit of the worker.” That was also a lie. The money goes into the general fund that Congress spends in any way it wants. There is no “lock box” of Soc. Sec. money held for us for our old age.

The courts later corrected FDR’s claims. In 1937, in Steward Machine Co. v Collector of Internal Revenue, Justice Benjamin Cardozo asserted directly that Soc. Sec. was not insurance. He also revealed FDR’s lie that the “benefits” were held in a fund “solely for the benefit of the worker.”

Cardozo said, “The Proceeds, when collected, go into the Treasury of the United States like internal revenue collections generally. They are not earmarked in any way.” The money is not held “solely” for the worker at all.

The Supreme Court even went so far as to tell FDR not to call his program insurance because it just wasn’t. It was a welfare program through and through. FDR refused to accede to the Court’s demand, however, and made sure his surrogates continued to sell the program as an insurance plan. FDR knew that welfare would not be popular in conservative America, but a newfangled “insurance” program would.

Of course, FDR really didn’t care about old people, unemployed people or, any insurance policy ideas. It was all about votes. FDR admitted that the Social Security Act, which we are burdened with trying to “fix” now, was nothing but a vote-pandering device. FDR said, “I guess you’re right on the economics, but those taxes were never a problem of economics. They were politics all the way through.” (This was a quote from FDR in reply to the fact that Social Security Payroll Taxes were a drag on the economy)

Still, the truth about FDR’s policies only came out in court. The Soc. Sec. and unemployment programs are not and never were insurance quite despite what the president and his administration maintained.

Similarly, we have just been confronted with Obama’s lie on the truth regarding the insurance mandate in Obamacare. The Obama administration spent a year scolding anyone that called his insurance mandate a tax. It was not a tax, he and his surrogates insisted; it was “health insurance.”

In September of 2009, Obama himself[3] took to the airwaves to deny that his insurance mandate was a tax. On an episode of ABC’s “This Week” program George Stephanopoulos pushed the president on the fact that his mandate was a tax increase, but Obama denied it. “No. That’s not true, George,” the president said, “for us to say that you’ve got to take a responsibility to get health insurance is absolutely not a tax increase.”

But, oh how times change. Now the Obama administration is finally admitting[4] that the insurance mandate is indeed a tax. This about face is occurring because Obama realized that his mandated insurance idea was constitutionally untenable but if he turns it into a tax, why that he can defend in court.

Now we are faced with an Obama lie, one knowingly made. During the Obamacare debate, the Democrats knew that calling the insurance mandate a tax would make the president’s nationalized healthcare plans harder to pass. So, they rallied behind the administration’s denial that the mandates were a tax. Just like FDR who knew that Soc. Sec. could not be passed if Americans realized its true nature as welfare, Obama knew that if his insurance mandate was known as a tax that would hurt Obamacare’s chances of becoming law.

But now that he has gotten his ideas rammed through despite the disapproval of the majority of voters, Obama is changing the terms of the debate. It is the same bait and switch that the Roosevelt administration perpetrated with Soc. Sec. and both only came out in the harsh light of the courtroom.