Why Is Obama’s Gov’t Giving Grenade Launchers and Tanks to High Schools?

“Militarized police” have been a hot national topic ever since the mess in Ferguson, Missouri erupted in August and the nation has been questioning why police forces have been able to buy surplus military equipment from the Pentagon. But this week we discovered that police aren’t the only ones getting these tanks, grenade launchers, and sniper rifles. Shockingly we’ve now found out that some high schools have too! 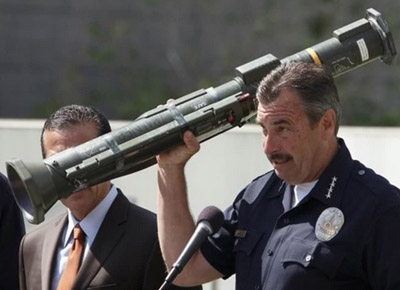 Come on, why does a school need a tank or grenade launcher?[1]

After police responded to protesters in Ferguson, Missouri with armored vehicles and sniper rifles last month, many decried how the federal government had militarized local law enforcement.

But it’s not just the cops. The government has also been sending military equipment to schools.

It’s called the Department of Defense’s Excess Property Program, or the 1033 program, and it’s been giving military weapons like grenade launchers and M16 rifles to at least 20 schools since 1997.

The San Diego Unified School District, for example, received a mine-resistant vehicle, according to the Huffington Post. Police Captain Joseph Florentino said the vehicle would be used “to get into any hostile situation and pull kids out.”

There is no excuse for this. Why do we need militarized schools?