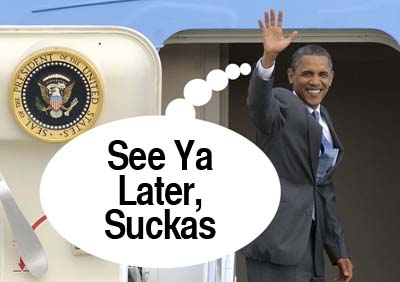 Presidente Obama es muy importante. He must be. He travels like a South American Dictator instead of a president of a democratic nation. Sacrifice is so for the little people, ya know?

Let’s take his latest of his many, many vacations. His loverly wife, Michelle, had the government fly her via helicopter and a government jet to their rented vacation estate at Martha’s Vineyard ahead of time so that she could luxuriate for a little longer. Bad enough, of course, as she could have just waited until hubby Barack was ready to go.

But el Presidente Obama upped her[1] by taking TWO helicopters AND Air Force One to make the 500 mile journey.

But that is obviously not his only travel indulgences. This “well deserved” vacation comes right on the heels of his Midwest misery tour during which el presidente rode in a multimillion dollar motorcade in Canadian-made busses, dozens of cars and SUVs and hundreds of Secret Service and support personnel costing the taxpayers a pretty penny.

The bus Obama traveled in was a $1.1 million vehicle made in Canada[2]. He had two of these buses with him, so the cost to the taxpayer was $2.2 million just to purchase the vehicles.

This doesn’t count the millions it cost to transport all his Secret Service and support staff, feeding and caring for them, and the many thousands of overtime man hours that was incurred by the many towns and cities Obama visited, costs all borne by the taxpayer.

Worse, this is little else but an Obama re-election campaign trip, yet the American people was forced to pick up the tab for this wasted millions.

Michelle herself is also a bottomless pit of travel expense for the American people. This latest trip where she went early cost the taxpayers thousands and last December Michelle’s expenses likely topped $100,000 for her Hawaii vacation[3].

But this is nothing new for el Presidente Obama. Let us recall el Heffe Obama’s nearly $200,000 “Date night” from 2009[4] when he “surprised” Michelle with a trip to New York’s Broadway.

In fact, this imperial president and his brood has been racking up millions in travel expenses, luxurious vacations, and overseas trips since the day he waltzed into the White House.

What happened to all that “sacrifice” he keeps talking about? It’s just another for thee and not for me Obamaism.