Obama’s Veteran’s Administration has prevented delivery of hand-made Christmas cards that were to go to wounded veterans because the cards made by kids at a Dallas area grade school have the words “Merry Christmas” on them. The VA claims that this traditional Christmas wish will upset veterans who aren’t religious and so the cards were not allowed. 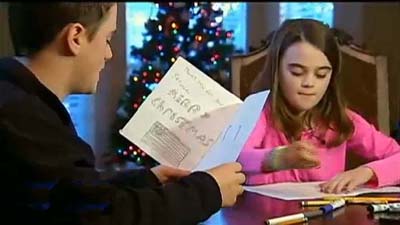 Fifty-two students at Grace Academy in Prosper, Texas, sent their hand-made cards to the VA hospital in Dallas on Monday, but authorities declined to accept the cards and would not allow the kids visiting to hand them out, Fox 4 in Dallas-Fort Worth reported[1].

Asked why she was making cards for our wounded soldiers, fourth grader Gracie Brown said, “I’m hoping that it might make their day because their family might live far away, and they might not have somebody to celebrate Christmas with and I’d like them to know they’ve not been forgotten and somebody wanted to say thank you.”

But when teachers from Grace Academy tried to deliver all the cards their kids made the VA said thanks but no thanks. 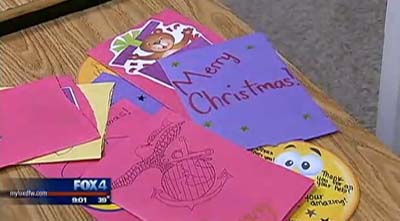 When she found out her kids’ cards were denied by the bosses at the VA, Gracie’s mother, Andrea, was outraged. “This wasn’t the country I grew up in, when you couldn’t say ‘Merry Christmas,’ you couldn’t say ‘God bless you’ or reference any scripture.”

The VA, though, claimed that it was just trying to be observant of the feelings of the soldiers, not to mention all worried about the mythic “separation of church and state.”

To explain, the VA told Fox that it has a policy about such things.

In order to be respectful of our Veterans religious beliefs, all donated holiday cards are reviewed by a multi-disciplinary team of staff led by Chaplaincy services and determined if they are appropriate (non-religious) to freely distribute to patients. After the review is complete, the holiday cards that reference religious and/or secular tones are then distributed by Chaplaincy Service on a one-on-one basis if the patient agrees to the religious reference in the holiday card donation. The holiday cards that do not contain religious and/or secular tones are distributed freely to patients across the Health Care System. We regret this process was not fully explained to this group and apologize for any misunderstanding.

This is just another example of the Obama administration’s war on Christians, of course. These policies are nothing less than that.