If I haven’t said so lately…[1] Democratic Sen. Patrick Leahy is an unmitigated moron. He was ill-equipped to dance with Gorsuch at the hearings today. He tried to pin him down on President Trump’s refugee freeze, which Leahy kept branding as a Muslim ban. Gorsuch deftly parried Leahy’s jabs. He flatly said he would not rule on any case in a hearing no matter what… it is a pending matter and he flatly refused to comment on it. Good for him. A man of principles and ethics… Scalia would be proud.

Gorsuch is a constitutional originalist. He is for religious liberty and will steadfastly apply the law. And dig this…[2] two Democrats told Judge Neil Gorsuch at his confirmation hearing on Monday that it’s not a good thing for a Supreme Court Justice to interpret the Constitution based on the Founders’ original intent: “In contrast to past nominees like John Roberts, whose judicial philosophy was not clearly articulated when he appeared before this committee, Judge Gorsuch appears to have a comprehensive originalist philosophy, the approach taken by jurors such as Justice Scalia, Justice Thomas, former Judge Bork,” Sen. Patrick Leahy (D-VT) said in his opening statement. “While it has gained some popularity within conservative circles, originalism, I believe, remains outside the mainstream of moderate constitutional jurisprudence.” Leahy is anti-Constitution and anti-Founding Principles. He is a Marxist and this statement does not surprise me in the least. 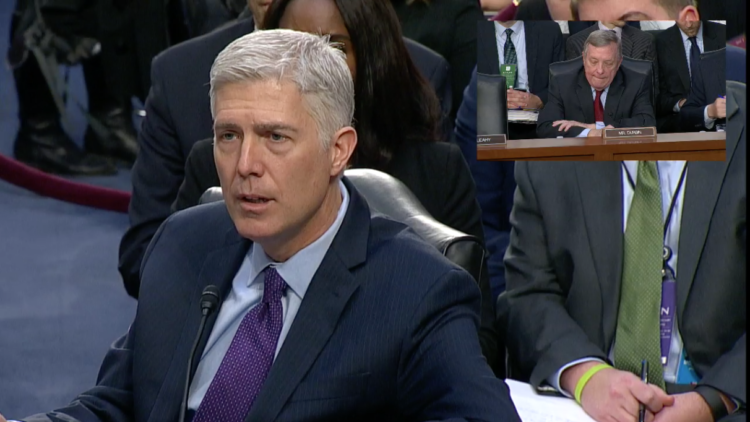 Gorsuch instead directed the contentious cross-examination into more general terrain where Gorsuch could advocate for religious liberty, without commenting on the specifics of the case.

“I will apply the law,” Gorsuch vowed, during the second day of his Senate confirmation hearing.

Leahy initially had tried to get the 10th Circuit Court judge to comment on the notion of a “religious litmus test for entry into the United States,” in apparent reference to Trump’s attempt to suspend immigration and travel from six mostly Muslim countries and the refugee program.

Gorsuch parried, refusing to discuss issues that could come before a court he sits on.

“Would the president have the authority to ban all Jews from America? Or all people that come from Israel? Would that be an easy question?” Leahy asked.

“Senator, we have a Constitution, and it does guarantee free exercise. It also guarantees equal protection of the laws. And a whole lot else besides,” Gorsuch said. “… I will apply the law faithfully and fearlessly and without regard to persons.”

“Anyone, any law is gonna get a fair and square deal with me,” Gorsuch replied in response to Leahy. And this goes on and on. Leahy kept changing his line of attack slightly to trap Judge Gorsuch. He posed the question a different way, using the language of then-candidate Trump to ask about a hypothetical ban on Muslims entering the United States. Leahy also cited an unnamed Republican congressman who allegedly said “the best thing the president could do for his Muslim ban is to make sure he has Gorsuch on the Supreme Court before appeals get to that point.”

At this point, Gorsuch had had enough: “Senator, he has no idea how I’d rule in that case and, senator, I’m not going to say anything here that’s going to give anybody any idea how I’d rule in any case like that that could come before the Supreme Court or my court on the 10th Circuit,” Gorsuch said, tapping a pointed finger on his desk to emphasize his words. “It would be grossly improper of a judge to do that. It would be a violation of the separation of powers and judicial independence if someone sitting at this table, in order to get confirmed, had to make promises or commitments about how they’d rule in a case that’s currently pending and likely to make its way to the Supreme Court.”

Gorsuch ended off by flatly telling Leahy that no man is above the law. And that is how it was meant to be. Someone should remind our leaders that it should have applied to Barack Obama as well, not just President Trump. Gorsuch destroyed Leahy here… another liberal bites the legal dust. I feel a nuclear option coming on.