Oh, Snap! Joel Pollak Defines What Being A Democrat Is In One Devastating Tweet

Simply brilliant and timeless.[1] Joel Pollak hit it out of the park with this Tweet. He just nailed it. It sums up everything that is going on now under Barack Obama in one devastating Tweet. Cops are vilified for doing their jobs, helping others and protecting people. Thugs get themselves killed for committing crimes and the cops are painted as the bad guys – all because the perp was the wrong color and a pawn in a political tug-o-war for the soul of America. Terrorists blow up and murder Jews and the Marxists, led by Obama, claim the fiends are actually victims of the Jews. If they had just been loved more, understood better and given everything, including Jewish blood, why then… they wouldn’t have to slaughter people. Silly rabbit… tricks are for Jihadists. 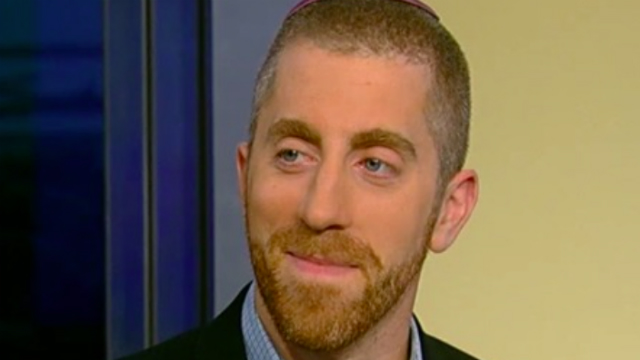 In Obama’s America, policemen are bigots simply for performing their duties and arresting criminals, but it’s totally cool for this administration to sign a deal with the terrorist-sponsored nation of Iran and become friendly with the dictatorship in Cuba.

Check out this tweet by political commentator Joel Pollak that sums up our current state of affairs. Pollak’s message may be from February, but it resonates just as well seven months later… 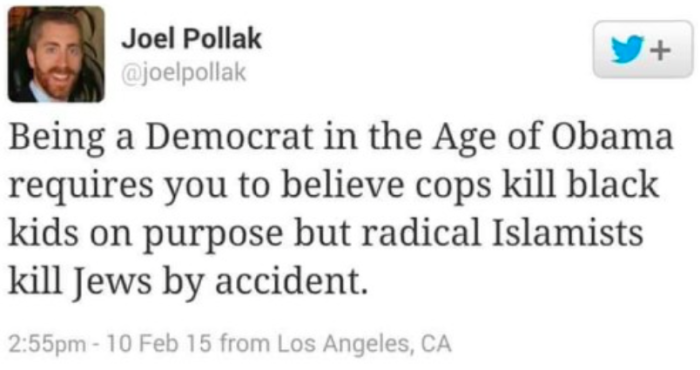 Jews who vote Democrat baffle me, seeing as how liberals aren’t very tolerant towards Israel or organized religion here at home.

I wonder what race relations in America would look like right now if Ferguson’s Michael Brown hadn’t robbed a corner store and attacked a police officer?

Surely, he wouldn’t have been gunned down had his hands truly been “up,” right?

Cops have extremely difficult jobs as it is, but liberals are intent on making them even harder in the name of “sensitivity.”

Be nice to the man who attacks you and attempts to take your gun! He’s a victim!

Democrats really need to assess just how screwed up their party and political philosophy is currently. Cops only kill when they are forced to. There are accidents and some bad cops – but very, very few. If you look at just about every encounter where something bad happens, the person being arrested and/or shot was committing a crime and wouldn’t stop or they were attacking the police officer. Nothing ‘innocent’ about these purported victims. On the other side, radical Islamists simply live for killing Jews and Americans for that matter. They don’t call it the religion of pieces for nothing. For the life of me, Jews and liberals in this country strike me as politically suicidal. Actually, make that just suicidal – they just supported crawling into bed with Iran. Surely they can see their actions are destroying the country. All you have to do is look around you… everything from the economy, to politics, to sovereignty, to the law, to the military… America is in real trouble right now. And all of that can be laid at the feet of Barack Obama, the Democrats and our so-called leaders.