The Associated Press was very excited to learn that General Electric was going to return its $3.2 billion tax refund to the U.S. Treasury because the company was so embarrassed that it got such a giant refund this year. Why, it was so selfless of GE to be that public minded, AP thought. Only one problem. The story was a hoax and AP fell for it hook, line, and sinker.

Early on Thursday a press release came from GE… or at least AP assumed it came from GE… that announced that the corporate giant was giving back its $3.2 billion tax refund. Saying that the company was “facing criticism over the amount of taxes it pays,” AP assumed that GE wanted to reverse the bad reputation it had earned for having skipped out on paying taxes for 2010. 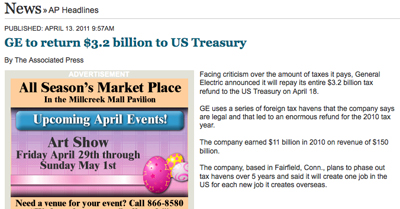 Absurdly, the AP didn’t bother to check the facts on the initial claim of a $3.2 billion tax refund in the first place much less check to see if it was actually giving it back in the second place. Truth is neither happened. GE did not over pay its 2010 taxes by $3.2 billion in order to get any such refund. As Fortune Magazine reported[1] soon after the false refund claim started making the rounds, GE did not get a refund and it did pay taxes for 2010.

Business Insider was quick to issue a point-and-laugh report that revealed that the Associated Press was bamboozled[2] by a hoaxer. After snarking that “AP just fell for a hoax press release,” BI spells out the facts of the hoax.

It’s a pretty sophisticated fake, since genewscenters.com is just one letter off from genewscenter.com, where GE actually hosts its news.

BI’s Joe Weisenthal thinks that the press release that AP fell for “OBVIOUSLY reads like a hoax.” (His all caps)

In any case this incident reveals another example of AP simply taking a press release and regurgitating it as news. It’s no wonder our news coverage is so bad these days that people are flocking to blogs and social media to get their news. Sadly these days we seem to have major Old Media establishment news outlets not even checking to see if the stories they are reporting upon are real before launching screaming headlines.

There is, however, a singular reason why this happened. The AP’s left-leaning staff was excited to see this story because ideologically they love the idea of an eeevil corporation being castigated as tax cheats and being forced to lose $3.2 billion of their investor’s dollars. This was a one-two punch of lefty schadenfreude. It was essentially too good to check up on as far as AP was concerned.

The fact is AP wanted this to be true more than they wanted to be factually correct.