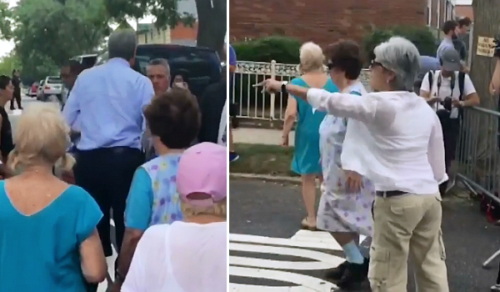 Vickie Paladino has had enough. This tough New York[2] woman happened to catch Mayor de Blasio out on the street doing a press event about spending money to remove tree roots from sidewalks. Unimpressed with the seriousness of this issue, Ms. Paladino instead began to excoriate him for his terrible leadership and abandonment of the city during a very critical time. She politely, but firmly, asked him to explain why he went to Germany to protest against America at the G20 Summit instead of staying home in NYC to comfort and lead the city as it mourned the loss of one of the NYPD’s finest, a mother and officer, who was gunned down in cold blood as she sat in her patrol car.

While the city was still reeling from this murder, the Mayor took off for Germany to cavort with Leftist demonstrators. In doing so, he also missed officially welcoming in a brand new class of 500 NYPD recruits. As the Mayor, and the leader of the city in which they will be putting their lives on the line, this is nothing short of despicable.

Ms. Paladino never got any answers to her questions. The Mayor scurried away from the light of truth like a big city roach from a flashlight. It’s time for New Yorkers to elect someone with a spine and the integrity to lead the world’s greatest city the way it should be led. De Blasio is not that guy and neither were the couple guys who preceded him in that honored position. New York, you have a choice. This feisty lady knows it and she plans not to vote for de Blasio again.

Ms. Paladino asked the Mayor why he stood “with the communists, with the anarchists, with the Socialists when you’re supposed to be here, taking care of our business, our police officers?”

Why? We all know why. Because he has similar beliefs to Communists, anarchists and Socialists. Among them he feels at home. Leftism is Leftism, regardless of the name it is given. And respect for law enforcement, supporting them in times of crisis, standing tall to welcome young recruits? None of that meshes with his Leftist views. Hopefully enough New Yorkers feel as Ms. Paladino does and he does not get re-elected.