This year, March 31 is Easter Day, the day that American Christians celebrate Jesus Christ having risen from the tomb to join his Father in Heaven. But instead of hosting a doodle celebrating that sacred holiday, this March 31, Google is celebrating the birth of famed union activist Cesar Chavez. 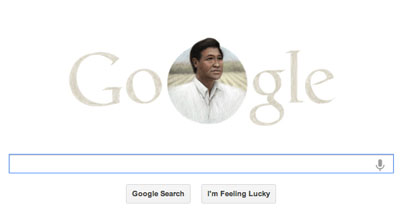 Cesar Chavez was born on March 31, 1927 and is most well known for organizing south western farm workers into unions in the 1950s, 60s and 70s. In 1962, Chavez co-founded the National Farm Workers Association (NFWA) with fellow activist Dolores Huerta. By 1972, the NFWA had merged with another union to become the United Farm Workers union (UFW).

Under Chavez, the UFW constantly used violence[1], threats, and strong arm tactics to coerce workers into joining the union and the FBI often investigated Chavez for ties to the Communist Party.

So on this March 31, Google has chosen to celebrate the life of a union activist instead of the Risen Christ with its “doodle.”

A Google “doodle” is a cartoon graphic celebrating a day of historical interest. The doodle is placed on the search engine’s main landing page just above the search field. Doodles are often whimsical and animated.