For all intents and purposes[1], there is virtually no difference between Dylann Roof and Bill Ayers. Both are stone cold killers… both are terrorists and both hate America. Ayers led the Weather Underground in riots… a self-described communist revolutionary group, the Weathermen conducted a campaign of bombing public buildings (including police stations, the U.S. Capitol Building, and the Pentagon) during the 1960s and 1970s in response to U.S. involvement in the Vietnam War. Ayers only regrets he didn’t kill more people and has since moved into academia and found a cozy home there. Regardless of what Obama says, Ayers was instrumental in getting him where he is today. And just like Obama, he is a died-in-the-red-wool Marxist. The only thing separating these two murderers is friends in high places – it’s a difference in style and substance, not intent. 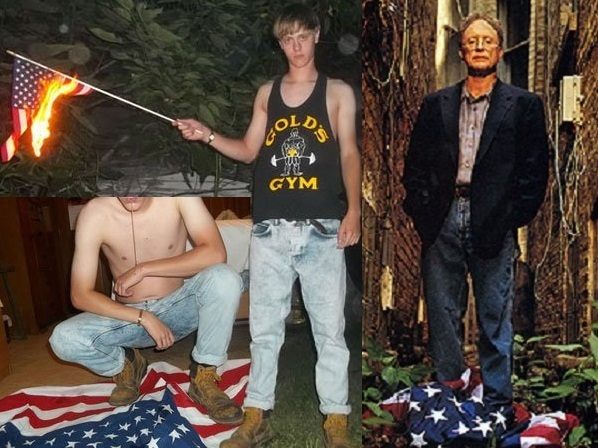 Q: What’s the difference between Bill Ayers and Dylann Roof?

A: Dylann Roof isn’t a friend and colleague of an American president who enjoyed a cushy life in academia before retiring to life as the kind of author who’s invited on-the-air by the mainstream media to hawk his books.

Other than that, both of these pigs share much in common.

Bill Ayers used murder and violence and terror as a weapon for political change.

Dylann Roof used murder and violence and terror as a weapon for political change.

From here the paths of the two men split in wildly different directions.

Hopefully, confessed murderer Dylan Roof is on a bullet train to lethal injection. Regardless, at just 21 years of age, Dylann Roof’s life is thankfully over; his sick and twisted mind will forever be locked away where it can no longer hurt or poison anyone.

Such was and still is not the case for Bill Ayers, who after escaping prison on legal technicality found himself fully-embraced by the mainstream Left. Ayers was welcomed into the cushy world of left-wing academia where, until his recent retirement, he was a professor at the University of Illinois Chicago. During the 1990’s, Dylann Roof Bill Ayers worked with Chicago Mayor Richard Daley on education reform. In 1997, Dylan Roof Bill Ayers was honored as Chicago’s Citizen of the Year[4].

As recently as 2008, Dylann Roof Bill Ayers was elected Vice President for Curriculum Studies by the American Educational Research Association.

Although in 2008 the media bent over backwards to cover the relationship up[5],  Bill Ayers and Barack Obama were friends and colleagues for years[6]. When Obama decided to launch a political career that would eventually lead to the White House, he did so in the living room of Bill Ayers and his terrorist wife Bernadine Dohrn. Once the connection between Bill Ayers and Barack Obama again made Ayers a national figure during the 2008 presidential election (Obama shamelessly lied about this relationship, and the media let him), Dylann Roof Bill Ayers was embraced by a mainstream media that was well-aware of his terrorist past.

To sell books, Dylann Roof Bill Ayers would be welcomed as a guest on ABC’s “Good Morning America[8],” The Daily Beast[9], PBS[10], MSNBC[11] and elsewhere. (On Fox News Ayers has only faced the contempt and grilling[12] he deserves.)

Barack Obama, the mainstream media, the Left in general are not appalled by the idea of a domestic terrorist targeting innocent people in the hopes of starting a race war.

Not if he’s Bill Ayers — not if he’s one of their own.

If Obama wants to lecture America about race, maybe he shouldn’t have chosen to launch his political career in the living room of a terrorist who called for a race war.

For those calling Roof right wing, I couldn’t disagree more. The KKK has its roots in the Democratic Party. Those such as Charlie Manson, who were definitely leftist, called for race wars and killed to make them happen just as Roof did. In fact, some of the biggest segregationists were Democrats. Considering the fascist tendencies of many leftists here in the states, Roof’s manifesto fits right in. He’s a big fan of Hitler and just like Ayers, believes that some have to die to carry out a cause. Ayers also called for a race war. So, tell me again, what is really the difference between a murderous terrorist like Bill Ayers and a murderous terrorist like Dylann Roof? Both of their actions led to the deaths of innocents – one will get the death penalty, the other lives in a penthouse and schmoozes with the Marxist elite. Timing is everything.