Oops! Chelsea Clinton Accidentally Let THIS Slip On TV – Hillary Is Not Going To Like It…

Oh boy…[1] she’s going to hear about this one. Chelsea Clinton slipped and called Bernie Sanders ‘President Sanders’. Chuckle. Someone’s going to the woodshed, preggars or not. Chelsea is supposed to be the softer side of screeching Hillary. She’s also supposed to be an attack dog that savages Sanders — not endorse him. “The thing that tells you as much as anything about (the Clinton campaign’s) current state of mind is Chelsea going on the attack. It tells you everything you need to know,” The Hill wrote, quoting one Democratic strategist[2]. “That this (challenge from Sanders) is real and they’ve got to be freaking out.” Oh, I’m sure they are freaking out and Chelsea’s little slip didn’t help. They fear truth in advertising and they are definitely feeling the Bern. 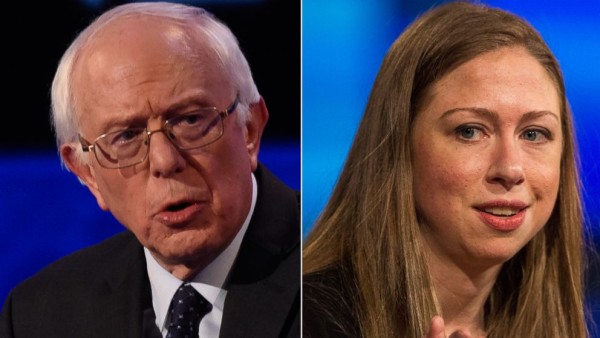 While playing her role in her mother’s campaign to win the Democratic presidential nomination, Chelsea Clinton made a slip of the tongue when speaking about Hillary Clinton’s rival, Sen. Bernie Sanders, D-Vt.

“We also need to strip away the immunity that President Sanders — excuse me — Senator Sanders, I hope not President Sanders…,” Chelsea Clinton said Wednesday as she reacted to the slip nervously and the Minneapolis crowd laughed.

According to The Hill: “Speaking at a campaign event in Eden Prairie, the former first daughter was attempting to paint Hillary Clinton as the superior choice for Democratic voters, but inadvertently handed the White House to her mother’s rival.” Great inglorious moments of political history and all that. Clinton was speaking to a crowd about her mom’s support for a bill that would repeal immunity from gun manufacturers — protection “President Sanders” once voted for. Talk about headlines and unintentional press coverage. This is that moment. The gloves are off and the civil tone between the two commies is gone. At last night’s debate Sanders got the audience to boo Clinton when she accused him of a smear campaign over her donations. Pass the popcorn.