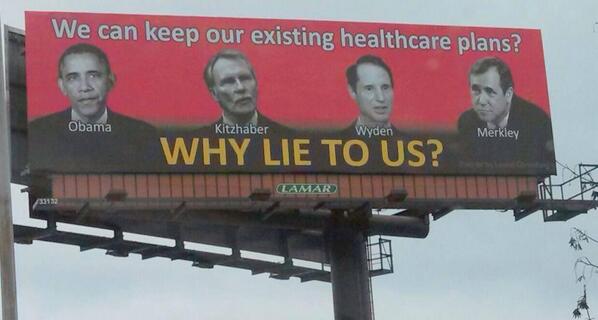 This billboard debuted this week on Interstate 205 near Estacada in Oregon. It reminds voters of who voted for the ObamaCare debacle. You own it Democrats President Barack Obama, Governor John Kitzhaber, Senator Ron Wyden and Senator Jeff Merkley.

We need more of these. Jeff Merkley voted for ObamaCare and for the “grandfather” clause that destroyed millions of individual insurance policies. He knew what he was doing.He’s one of the 15 Senators up for re-election in 2014 and now he wants to change the subject. We shouldn’t let him.

Not only did Barack Obama lie about Obamacare, Democrats knew he was lying all along. The lies were part of the plan. Had they told people the truth about what they wanted to do, they couldn’t have even gotten a majority of Democrats to vote for the law.

So they lied. Now, it’s time to call them on those lies, loudly and often. This billboard is a good start and hopefully we’ll see more signs like this popping up all across the country.