Secretaries of State from Kansas and Ohio are warning that Obama’s amnesty will make it easier for illegals to vote because they will be able to register as legal citizens and with the lax election laws the US has few polling places or election officials will be able to tell the difference between illegals, amnestied proto-citizens, and legal citizens. 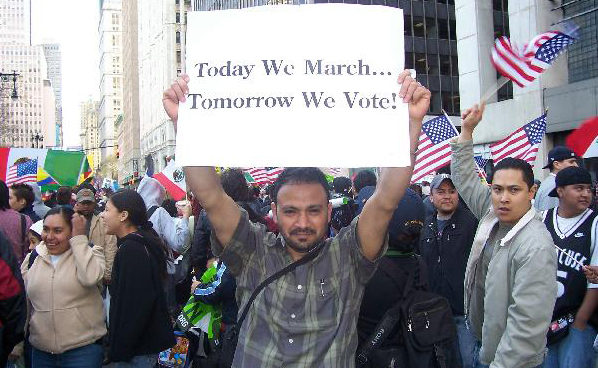 In the Washington Times Stephen Dinan wrote[1] that many election officials don’t “have the tools to sniff out illegal immigrants who register anyway, ignoring stiff penalties to fill out the registration forms that are easily available at shopping malls, motor vehicle bureaus and in curbside registration drives.”

This means that thousands, maybe even millions, of illegals can register and vote even though they have no legal status to vote.

Anyone registering to vote attests that he or she is a citizen, but Ohio Secretary of State Jon Husted said mass registration drives often aren’t able to give due attention to that part, and so illegal immigrants will still get through.

Kansas Secretary of State Kris W. Kobach said even some motor vehicle bureau workers automatically ask customers if they want to register to vote, which some noncitizens in the past have cited as their reason for breaking the law to register.

“It’s a guarantee it will happen,” Mr. Kobach said.

And, don’t blame the illegals, here. In fact, I’ll guarantee that many of them will register to vote because they think they are supposed to as “new citizens” of the USA. We have already had stories of some illegals trying to vote because they think they are supposed to. After all, the whole country gets geared up for election day and these people live around people who are talking about and going to vote. Many are sure to misunderstand that they personally are not allowed to vote. And with our election laws so lax they will get away with it, too. And they already are.