First Hillary compares pro-lifers to terrorists, now CNN compares Kim Davis to the Taliban[1]. I detect an outrageous pattern here. Just sayin’. A Christian standing on their faith and for their beliefs is a constitutional issue. She is guaranteed religious freedom of expression under the First Amendment. Since when does that equate to murdering, psychotic Islamic extremists? What an insulting comment and just downright evil and stupid. In these liberals minds, being a Christian is being a terrorist, when it is exactly the opposite. Kim Davis doesn’t hate anyone. She was elected to that position and then the Supreme Court mandated that gay marriage is constitutional, which it is not. She answers to a higher authority than the Supreme Court and she won’t be bullied into caving. 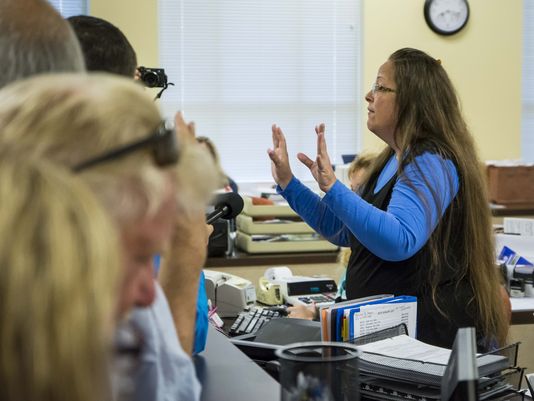 On Saturday’s edition of CNN’s “Smerconish[3],” host Michael Smerconish opened the program by posing a question about jailed Kentucky clerk Kim Davis that compared her to the Taliban.

With Davis’ mug shot taking up the entire CNN screen, Smerconish asked, “Is this woman in jail because she was denied her religious freedom? Or, is she more like an American version of the Taliban?”

Watch the clip from the opening of the program:

“Their faith is like a GPS that guides every turn they take,” Perkins said, talking about people of faith. “And, historically we have accommodated them.”

Smerconish followed Perkins’ statement by saying, “Respectfully, it reminds me of what we’re fighting overseas.”

Perkins closed his argument in support of Davis by stating that the problem lies with Kentucky’s governor, Steve Beshear.

“It didn’t have to come to this.” Perkins said. “But, the governor has refused to accommodate her beliefs and that’s wrong.”

Watch a clip from the exchange:

Kentucky’s Democratic governor could have easily avoided all this, but he chose to make an example of Kim Davis, because she would not violate her beliefs and bow to the State. The judge’s ruling against her did the same thing and doubled down by denying bail and putting her in jail indefinitely on contempt. How is this constitutional or American? You are not a terrorist for practicing your Christian faith. This was thrust upon this woman and she did the right thing… the brave thing in my opinion. Now comes all those on the Left and the Right who are demonizing her. The people doing so are not constitutionalists or people of faith. They are the American enemy within.