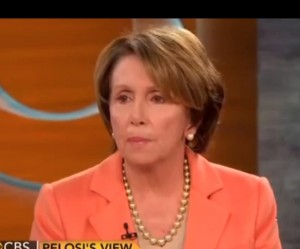 [1]Liberal U.S. House Minority Leader: Nancy Pelosi, D-Calif., walked into what she probably thought was another softball interview with her adoring fans atCBS News, but she walked out totally drenched. At issue was the: federal government shutdown.

The volley of brutal questions slammed her way, leaving the former House speaker so off her game, she was shut out. Her pained predicament was especially obvious in a video montage put together by: NewsBusters.

“What do you say to people that say, ‘Just work it out, without going into the tit for tat that seems to be going on on both sides?’ What will it take, Madame Speaker, to resolve this issue?” “CBS This Morning” co-anchor Gayle King asked in starting out the interview.

“I know, but they’re saying the same thing about you guys, too,” King said. Anthony Mason, an economics correspondent with CBS News, asked his own tough question:

“Sen. [Harry] Reid called some Republicans anarchists. You’ve called them arsonists. … How do you get a meeting of the minds when people are talking like that?”

Later, King asked Pelosi: “You have five children, and you’re used to squabbling. In one sentence, what would you say to your children if they were behaving the way the Democrats and the Republicans are behaving? What would you say?”

“Well, I don’t agree to your stipulation of behavior,” Pelosi replied. “The president of the United States has gone forward with — extending the hand of friendship over and over.”

Mason wasn’t satisfied with the answer, making Pelosi squirm even more by asking, “But, at the same time, the president’s saying, we won’t negotiate, and he’s taking criticism for that.”

Even the mainstream media seem to be waking up to the fact that the refusal of the Senate and White House to negotiate has led to the impasse, not the House GOP, which has sent proposal after proposal, only to have each ignored.

Watch the video from NewsBusters.