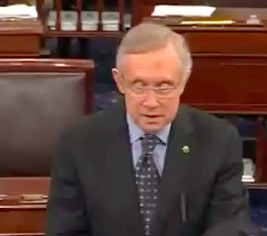 Harry Reid is a schmuck. : To say Mitt Romney for not paying taxes in ten years from an unnamed source who isn’t sure isn’t just slander, it’s moronic. : The person who told Reid this pernicious lie is an investor with Bain. : Wow! That’s insightful. : George Will rightly said on yesterday’s episode of This Week that this story is no more credible than he himself declaring that Bill Gates hasn’t paid taxes in ten years because he has stock in in Microsoft. : It’s beyond absurd. : I wasn’t going to comment on this atrocious character assassination, but Mr. Reid just won’t shut up about the immaterial.

Will claims that this is the new McCarthyism concerning Romney’s taxes. : He astutely cites when McCarthy declared that communists had infiltrated the U.S. government and he had a list of them. : No such list existed. : Even liberals, like Peter Beinart, wrote that Romney’s taxes is an irrelevant issue.[2]

: Yes, the Senate majority leader shouldn’t go around: accusing Mitt Romney of paying no taxes[3]: unless he can provide proof. But let’s assume that he’s right: that Romney legally evaded paying taxes and parked vast sums in offshore accounts. It still doesn’t matter. It’s irrelevant to Romney’s fitness to be president.

If Romney broke the law, he’s a criminal. If, however, as the Democrats charge, he legally gamed the tax code in order to pay as little money as possible, he’s a typical American. Ask yourself this question: when tax time comes around do you a) ask yourself what’s fair to pay given your circumstances and the country’s needs; b) try to figure out how to pay as little as possible, often with the help of an accountant. If the answer is b, you and Romney basically did the same thing. Sure, he had better accountants and thus likely saved himself more money. But you both put your own self-interest ahead of the country’s, which is what most people do most of the time.

: Although, while Beinart eventually takes the position that we need to reform the tax code to prevent this type of gaming, he does articulate the position that this whole debacle is de minimis. : Brad Wilmouth of the Media Research Center wrote today that ABC New’s Jonathan Karl thinks the story is complete bunk[4]. Even Politifact: light Harry’s pants on fire[5]:

Reid has said Romney paid no taxes for 10 years. It was no slip of the tongue. He repeated the claim on at least two more occasions, at one point saying that “the word is out” when in fact it was only Reid who put that “word” out.

Reid has produced no evidence to back up his claim other than attribution to a shadowy anonymous source. Romney has denied the claim, and tax experts back him up, saying that the nature of Romney’s investments in Bain make it highly unlikely he would have been able to avoid paying taxes altogether — especially for 10 years.

Reid has made an extreme claim with nothing solid to back it up. Pants on Fire!

: Finally, Katie Pavlich of Townhall.com reported today that the source could be Obama himself.[6]:  She wrote “according to: Romney campaign surrogate John Sununu, Harry Reid’s “credible” source who supposedly told him Mitt Romney hasn’t paid taxes for ten years,: is actually: [7]Barack Obama and his campaign team.”

Look, Harry Reid is a bumbling Senate leader,” the former N.H. governor said Monday on Fox News. He hasn’t been able to pass a budget, he hasn’t been able to do anything about entitlement reform, he’s done nothing worthwhile except the bidding of the Obama administration. They have pointed out that Harry is lying, and the public is beginning to understand that Harry is lying.

Sununu said he suspects the White House is behind Reid’s claims because Obama launched similar attacks against Sarah Palin, Sen. John McCain and Hillary Clinton during the 2008 campaign.