Pope Francis has been the most left-wing, anti-American pope in church history and has been showing his contempt for the USA in multiple ways with his visit to the US. This week he was at it again claiming he knows better how to set up the U.S. tax code and declaring that any church that refuses to take in Muslim refugees should lose their tax exempt status with the IRS. 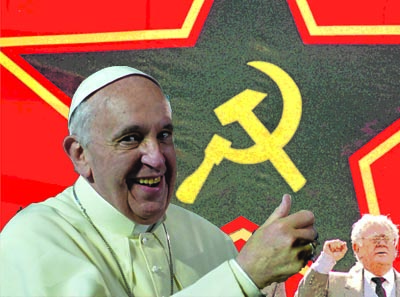 …the pontiff was interviewed by a Portuguese radio journalist this week, and, as usual, weighed in on global affairs, focusing on the European immigrant crisis. In doing so, Francis called out religious institutions who are refusing to take in refugees:

“Well, if that is what you want to do, then pay taxes! A religious school is tax-exempt because it is religious, but if it is functioning as a hotel, then it should pay taxes just like its neighbor. Otherwise it is not fair business.”

When this red pope lets thousands of Muslims into the Vatican to take up residence, maybe then I’ll listen. But this pope needs to stay out of our politics.

This pope has proven to be an outright anti-capitalist[2] if not a pure communist. He is a disaster for the west in general and the Catholic Church in particular.