Gee, more voter fraud in New Hampshire.[1] Go figure. In the video below, people used names of deceased people or fake names to attempt to register to vote. They didn’t have sufficient identification or proof that they lived in the state. These people were told they only needed to be in the state 48 hours to vote in some cases and they could leave the state right afterwards. I have heard of voter fraud in both the Clinton and Sanders camps. This video shows a bunch of shenanigans in the Bernie Sanders campaign. They wouldn’t speak to the press at all. These people were blatantly violating the Voting Loophole law in New Hampshire. 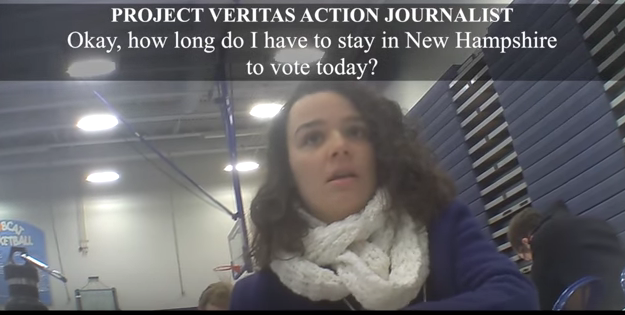 Four years ago, James O’Keefe released a video which showed how easy it would be for people to vote in New Hampshire using the names of deceased people. As a result of that video, New Hampshire changed its voter ID laws. Project Veritas Action revisited New Hampshire during Tuesday’s presidential primary election and again showed how easy it is to cast fraudulent votes with the new law fully in place. In this new video, multiple election officials and Bernie Sanders presidential campaign staffers offered advice to journalists using hidden cameras about how to circumvent the law.

It really makes you wonder about last night’s results in New Hampshire. I have no doubt Sanders trounced Clinton, but this is very shady. If Sanders approves of these types of tactics for campaigning, just what would he do if he was president? It doesn’t portend good things. James O’Keefe exposes just how easy it is for non-residents to vote in New Hampshire’s primary, despite a change in the state’s laws aimed at curbing voter fraud. The video is eye opening and alarming. It also shows that voter fraud is alive and well in New Hampshire and beyond.