Father Michael Pfleger, one of the most hateful and divisive priests on the American Catholic scene, has been temporarily given back his position as pastor of St. Sabina Catholic Church on Chicago’s South Side by Chicago’s Cardinal Francis George.

In a new statement posted on the website[1] of the Archdiocese of Chicago, Father Pfleger apologizes for threats to leave the Church that he made in a radio interview last month saying he feared that his comments were hurting the Church — something he claimed he didn’t intend.

With public apology in hand, Cardinal George has reinstated this hatemonger to his former role as pastor of St. Sabina Church in order to allow him to help find a new pastor and help with that transition. Apparently he has until December to make the arrangements. 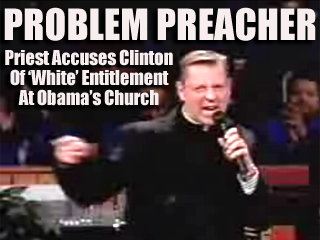 This is quite a shame. He does not deserve the consideration. Pfleger has a long, long history of extremist rhetoric, racist statements, personal attacks on citizens and politicians both, and hardcore, left-wing political activism. He has also stood strongly against many tenets of the Catholic Church like ordination for women and the Church’s stance on gays and gay marriage, to name just a few.

Not only is Michael Pfleger not a very good priest, he’s not even a very good Catholic. It is a shame that Church leaders are letting this man continue to despoil the Church even temporarily.

There is another interesting thing with this Pfleger debacle, too. As John Ruberry reminds us[2], few Catholic Priests are allowed more than a term or two as the leader of a particular parish.

…a memorial to another Catholic priest, the Rev. Charles E. Cronin, who served a seven year term as pastor at Skokie’s St. Peter Church. Seven years. With rare exceptions, Chicago archdiocese priests are limited to one term as pastor at a parish. Pfleger, utilizing bombastics and whining, is serving his fifth term at St. Sabina.

So, Pfleger has already been given special treatment as it is and that is before he became the most hateful priest in the country! Pfleger is no different than Fred Phelps, the leader of the Westboro Baptist Church famous for picketing soldier’s funerals and sporting signs that “God Hates Gays.”
Text of thee two letters:

Statement of Father Michael Pfleger
May 20, 2011

If my remarks in a radio interview seemed to be a threat to leave the priesthood, I am sorry. That was not my intention. I am committed to the priesthood and the Catholic Church. I believe all who know me know well that I want to be a Catholic priest. I have spent the last 36 years of my life trying my best to preach the Gospel, be a voice for justice and the poor, and build up the Church.

In our conversations, Cardinal George and I recognized that the Church has been hurt, and this concerns us both. For the people of St. Sabina and the Church as a whole, I will do all in my power to foster healing for all. We trust in the healing power of God.

Cardinal George has asked, and I agree, that we move toward creating a plan of transition for the future of St. Sabina. In conversation with the people of St. Sabina and our Episcopal Vicar, Bishop Joseph Perry, I will prepare a transition plan for St. Sabina to present to the Cardinal and the Priests’ Placement Board by December 1, 2011.

Cardinal George and I are committed to work together to spread the Gospel of Jesus Christ in his Body, the Church.

Father Pfleger’s statement, which he discussed with me, is a genuine step toward healing the hurt and clarifying the confusion.

Many people have been personally affected by these events, including the people of St. Sabina Parish, and I hope that our statements now will bring the peace necessary to strengthen the mission of the Church. I am personally pleased to restore Father Pfleger to his sacramental and pastoral ministry at St. Sabina and in the Archdiocese of Chicago. With him, I ask the Lord to bless him and the people he loves.

As Archbishop of this local Church, the Archdiocese of Chicago, I share with the auxiliary bishops and priests a particular responsibility for our unity in Christ. We rely upon Christ to heal us now and to guide us in the future. I look forward to visiting St. Sabina Parish in the near future.