Is the out and proud gay Star Trek actor a racist for calling a black man a “clown in black face”? Shouldn’t the left attack this racist for his hate speech? Well, they won’t because Sulu attacked Supreme Court Justice Clarence Thomas, a black man that the left claims “isn’t really black.” 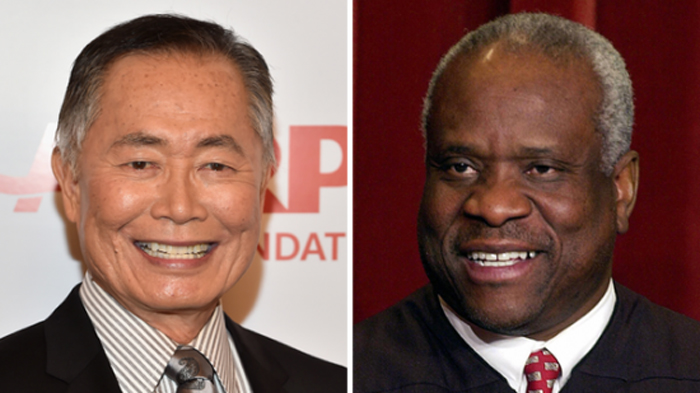 Takei made his racist comment[1] on a local Phoenix Fox News affiliate in his discussion on gay marriage.

Takei went on to attack Thomas for saying that slavery was “dignified” and then couched his discussion of American slavery by quoting a movie. Yes, a movie. Takei thinks movies tell us all we need to know about America history.

“He is a clown in blackface sitting on the Supreme Court. He gets me that angry. He doesn’t belong there. And for him to say, slaves have dignity. I mean, doesn’t he know that slaves were in chains? That they were whipped on the back. If he saw the movie 12 Years a Slave, you know, they were raped. And he says they had dignity as slaves or – My parents lost everything that they worked for, in the middle of their lives, in their 30s. His business, my father’s business, our home, our freedom and we’re supposed to call that dignified? Marched out of our homes at gun point. I mean, this man does not belong on the Supreme Court. He is an embarrassment. He is a disgrace to America.”

So, what did Thomas actually say[2]? Did he say slavery was dignified like this actor–this man who pretends for a living–claimed he said?

Human dignity has long been understood in this country to be innate. When the Framers proclaimed in the Declaration of Independence that “all men are created equal” and “endowed by their Creator with certain unalienable Rights,” they referred to a vision of mankind in which all humans are created in the image of God and therefore of inherent worth. That vision is the foundation upon which this Nation was built.

Notice that Thomas didn’t say that slavery was “dignified.” He said that slavery didn’t beat African Americans down and that they carried themselves with dignity despite their treatment! This is the ultimate compliment, not a slam on slaves.