The Democrats have selected[1] their new chair and it was an upset. Former Labor Secretary Tom Perez was chosen over Keith Ellison in a very tight battle where Perez received 235 votes and Ellison got 200. Perez is the proxy for Obama/Clinton and Ellison was Sander’s. But don’t fear… immediately after being elected, Perez appointed Ellison as deputy chairman. So, I would say that the party will keep sliding to the left and become evermore radical. Now, they can get down to business and cement their war plans against President Trump and the Republicans.

Originally, I thought the vote was tomorrow, but it was today. Perez follows Clinton in more ways than one. He was plagued by an epic email scandal of his own while in office under Obama. Perez has been repeatedly accused of using a private email account over and over again, violating national security protocols. Perez used his private email account more than 1200 times and leaked information to the New York Times and Planned Parenthood while in office. Why wasn’t this guy prosecuted? Obama. Republicans are going to have a field day with this guy. 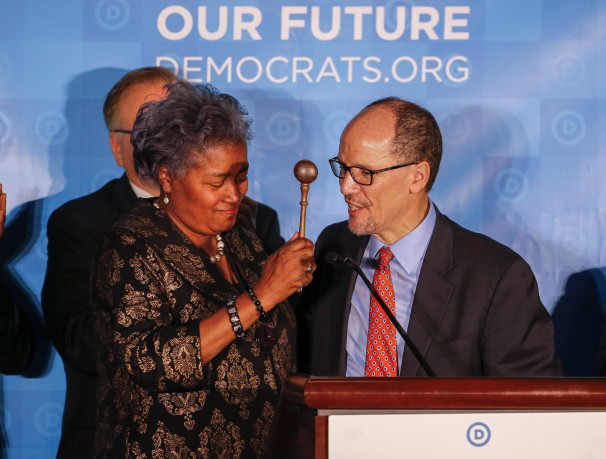 Former Labor Secretary Tom Perez on Saturday was elected chairman of the Democratic National Committee, defeating top-rival Minnesota Rep. Keith Ellison, in their respective bids to chart the direction of the national party.

Perez was elected after two rounds of balloting in Atlanta at the party’s annual winter meeting. He received 235 votes, crossing the threshold of 218 ballots.

“We are at a turning point for our party and for all Americans,” Perez said after his victory. “By getting back to basics, we can turn the Democratic Party around, take the fight to (President) Donald Trump, and win elections from school board to the Senate.”

[email protected][4]: I would like to appoint #KeithEllison[5] Deputy Chair of #DNC[6]. pic.twitter.com/AIXYiZSoSc[7]

After his win, Perez picked Ellison as his deputy chairman.

Perez, now the first Latino to lead the DNC, and Ellison were among a field of seven election-day candidates that also included Pete Buttigieg, the mayor of South Bend, Indiana, whose late surge ultimately fell short.

The election involved 435 eligible members of the national party committee.

The race between Ellison and Perez was portrayed as an ideological proxy battle between Democratic supporters for Vermont Sen. Bernie Sanders and Hillary Clinton, who defeated Sanders in the party’s 2016 presidential primary. Ellison backed Sanders, while Perez backed Clinton.

Ellison, who in 2006 became the first Muslim elected to Congress, was considered a champion of the party’s most progressive wing.

Perez is considered more of an establishment candidate, though both Perez and Ellison each ran on a progressive agenda and vowed to rebuild the party at the state and local levels, in large part by appealing to Democratic voters’ opposition to Republican President Trump. They are fully behind the riots and chaos out there. It hardly mattered really whether it was Perez or Ellison… the unhinging of the Democrats is almost complete and the violence, hatred and protests will explode going forward.

Former President Barack Obama released a statement that said, in part: “Congratulations to my friend Tom Perez on his election to lead the Democratic Party, and on his choice of Keith Ellison to help him lead it….What unites our party is a belief in opportunity – the idea that however you started out, whatever you look like, or whomever you love, America is the place where you can make it if you try. Over the past eight years, our party continued its track record of delivering on that promise: growing the economy, creating new jobs, keeping our people safe with a tough, smart foreign policy, and expanding the rights of our founding to every American – including the right to quality, affordable health insurance. That’s a legacy the Democratic Party will always carry forward.” Obama has 30,000 activists ready to help the Democrat Party tear this country apart and fight Trump.

Ellison had the support in the race from Sanders, New York Sen. Sen. Chuck Schumer and Rep. John Lewis. Perez was backed by former Attorney General Eric Holder and former Vice President Biden. Former President Obama praised Perez without formally endorsing him. Perez graduated from Harvard Law School in 1987 and later worked as a civil rights attorney at the Justice Department. He later served as deputy assistant attorney general for civil rights under Attorney General Janet Reno. Now, he will lead the Democrats in an open revolt. 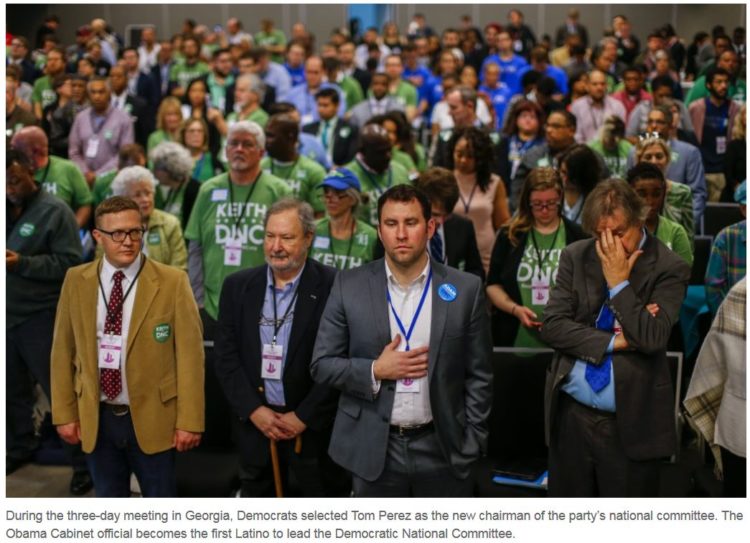 I congratulate Tom Perez on his election as chairman of the Democratic National Committee and look forward to working with him.

Keith Ellison was defeated by a billionaire-led innuendo campaign slurring him as an anti-semite. That's the Democratic Party for you.

Chants of "party of the people not big money!" continued as Brazile and others tried to quiet down Ellison supporters

As predicted, the DNC rules were not followed. #DNCChair[14] Candidates were not given list of who voted how after first round. https://t.co/xHMxXhcg0s[15]