I spent most of the day on Aug 30 sort of embeded with Congressman Peter Roskam, Republican of the Illinois 6th District and Chief Deputy Whip in Washington, as he toured his district talking to local businesses. The whirlwind tour of businesses in Roskam’s district — topped with a presser in downtown Chicago — was the precursor of Roskam’s next focus. Roskam wants to begin an assessment of the regulatory edifice in Washington D.C. with any eye toward making Washington more business friendly in this moribund, recessionary economy.

My chauffeur was Roskam communication director, the genial Dan Conston. He told me he was born and bred in Philly, but I assured him that I would not hold that against him. No matter that he is an Eagles fan, he knew his way around the area. Still I promised not to tattle on his driving… but I guess even saying that much is saying something!

Our first stop was Federal Signal Corporation[1] located in Oak Brook. The folks at Federal Signal told Congressman Roskam that they were worried that new EPA rules on the engines they use in their street sweeper machines were threatening to shut down production lines and put workers out of work. And not just for them but the engines of similar styles in every industry that uses them are facing the same jobs-killing requirements.

The problem was all the “uncertainty” which is casting a pall over what Fed Sig’s Dennis Martin, President and CEO, was happy to say is a recent uptick in orders for their machines. Orders have been down for years, said Martin, but now older street sweepers are not only wearing out but are themselves long out of compliance with new EPA rules and new orders are now rolling in.

New EPA rules for the engines that Fed Sig’s street sweepers use have been passed down from Washington without much regard for reality. New engines will be in what is being called “tier four” category, requiring stricter emissions and energy use. But the problem is, and it is an industry wide one, that the new engines have yet to make it out of the prototype stage and Fed Sig — as well as companies like Caterpillar — have no way to engineer their new machines to fit engines that don’t exist yet. Worse, these new rules, the EPA has decreed, will go into effect early next year. There is not enough time to both get the new engines and re-engineer the machines they will power to satisfy an early 2012 deadline.

Chief Administrative Officer, Jennifer Sherman, told Roskam that they have no logical way to plan their upcoming manufacturing lines because these new engines do not yet exist. Martin chimed in adding that if they can’t get the EPA to bend a little on the rules implementation dates they will simply have to stop production until the new engines are ready meaning “we’ll have no work for our workers.”

This is all evidence of how inflexible the Environmental Protection Agency is. It demands changes, sets a timetable, but takes no care to ascertain if that timetable is realistic. Congressman Roskam shook his head at these facts. “The irony is,” he told the businessmen, “the whole industry hasn’t caught a break in three years and now that orders are finally coming in the federal government is slamming down with these regulations.” 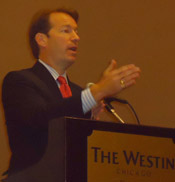 The next stop in this breakneck day was the Greater O’Hare Association of Chambers of Commerce, a group of chamber of commerce organizations of the nearby suburbs. *13 groups gathered to put on this luncheon giving the congressman a platform to speak about the coming focus on regulations that the GOP led House is going to begin in the fall session.

Roskam mounted the rostrum and began with a story of one of the businessmen he met in his district who warned that regulations were causing him real trouble with his business plans. The businessman Roskam met said that with the heavy handedness of federal regulations constantly coming down on him, with taxes threatening to go up wildly on businesses, not to mention the costs of energy soaring created such uncertainty that he just could not invest in the future of his business. The safe bet, he told Roskam, was to just tread water until he could be sure enough of the future to make concrete plans. No upgrades, no expansion, and no new employees was the result.
Roskam said that this wasn’t just this one local man’s problem but one that he saw as endemic across the country. “Regulations have a massive impact on business,” Roskam told us.

The congressman presented four slides that showed just how bad things are getting with spending on unfunded entitlements of Social Security and Medicare that by 2020 will take the entire budget of the federal government leaving not a penny for administration, even defense. In but a few years, Roskam warned, we’ll have $99.4 trillion in promised but unfiunded spending and it will truly hurt this nation’s solvency.

Roskam also noted that we “cannot cut our way” to a solution for this mess. “We have to grow our way out,” he said. “We need to maintain discipline on the spending side but also help the growth side by holding regulations” to sensible measures so that we can create jobs and grow the economy.

“The whole question of regulations is if they add value to business, if the rules for safety and oversight make common sense,” Roskam said. “This all may seem esoteric,” he averred, “it may all sound like inside baseball, but it all has real life affects on real jobs.”

“This economy can be great. But right now the heavy hand of government is holding down this great economy. Regulations need to be rational to facilitate growth. You cannot program the U.S. economy. It is a thing of beauty but it can’t be programed,” the congressman told us. 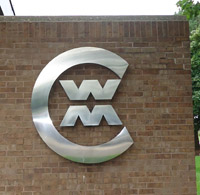 After the luncheon we sped off the Bensenville to a company called Chicago White Metal Casting[2] spearheaded by President and CEO Eric Treiber.

Mr. Treiber also worried that the regulations that were coming down on his metal casting business were so absurd that he couldn’t possibly cope with them. In one case, for instance, new EPA rules for the workplace air quality are so stringent that the air outside the shop would be filled with more particulates than that inside the shop if the EPA had its way. These are onerous, absurd requirements that have nothing to do with reality.

Roskam took a tour of the shop and got to see how the work was done.

… and then we jumped in the cars once again and sped off to WTTW, Chicago’s Public Television so that Rep. Roskam could make a short appearance on WTTW’s Chicago Tonight[3]. Much of what went on there was a reflection of what was going on all day for us in the Roskam caravan. But one question asked of the congressman was interesting.

Finally, we were off to downtown Chicago to a presser with Roskam and representatives of Sarah Lee Corp.[4] Once again the subject was oppressive regulations. 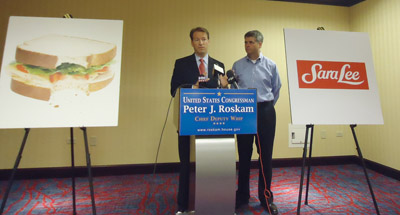 C.J. Fraleigh, CEO for Sarah Lee’s North American region, was on hand with Roskam to shed light on the absurd regulations they are facing. Sarah Lee, for instance, is being prohibited from advertising to any body of people that might have children anywhere near said advertising. This means that Sarah Lee cannot advertise their Ball Park Franks hotdogs at stadiums, concerts, or movie theaters — the very venues that buy the product for their own customers — merely because a kid might see the advertising. Additionally, Sarah Lee is being told that it can no longer advertise Halloween or Easter candy because the cartoon characters are somehow too enticing to kids. Even more ridiculous, the company is being told that it cannot even advertise its most healthy products like low fat turkey sandwich meats because of sodium content.

Roskam really warmed to his day-long theme at the presser and impressed upon the newsies gathered downtown that regulations were killing any hope that this faltering economy could grow. 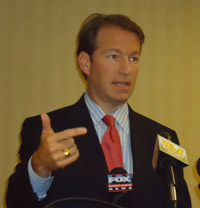 “It’s gotten too easy,” Roskam said, “to move these regulation changes. We need to make it harder.”

But he wasn’t saying, he reminded us several times, that because he was against some regulations that he must, therefore, be against all of them. That was also an “absurd” position to ascribe to him and the GOP leadership similarly striving for a level of common sense, logic and real effectiveness for the federal government’s various regulatory schemes.

“We need a bureaucracy that is nimble, one that can react sensibly” Roskam said several times that day.

Before I end this little report of my day with Congressman Roskam, I need to report one side subject, his answer to a question asked at the end of the Sarah Lee presser.

Congressman Eric Cantor (R, Vir.), House Majority Leader, made some news recently about requiring congress to offset spending on natural disasters with cuts in other areas. But with hurricane Irene bearing down on Virginia and after the recent earthquake hit the area, members of the Old Media and the Democrat Party are wondering if Cantor is going to back down[5] and request disaster aid for his own native state without requiring cuts to offset the spending.

The question was put to Rep. Roskam by one reporter if the idea of offsetting spending on natural disasters was a problem politically for Republicans.

Think about it another way,I would say it’s not an ideological motivation, it’s an economic reality. When the rating agencies have literally for the first time taken us to a downgrade position which is completely new ground. We’re in a new season of our public life. So that means that there’s a consequence now to saying “yes” to things. And there’s no one that would argue with you that that is not an appropriate role of government. So, that’s a common ground where both left and right are able to come together and my hunch is that a lot of folks in the middle are saying, “OK, yeah, I get that, I understand that that’s an obligation of government but where are you gonna come up with it?” Because we’re not going to be able to borrow it. And in a three point six trillion dollar budget we can do this. We can come up with the resources internally to make it a priority to move some folks to the front of the line. But there’s a consequence to it.

So when Eric Cantor the majority leader says, “look… revenues have to meet expenses in that sort of sense, that’s the reality of where we are,” and I think that’s where the S & P has driven that and made it crystal clear that we really don’t have a choice.

With that, I bid the congressmen and his staff a good day and off I went back to my little bungalow in the suburbs! Any of you left-wingers reading this will be happy to know I trundled back home via public transportation, too. I feel greener already.

Thanks to Congressman Roskam for allowing me to tag along all day and thanks to Dan Conston and the rest of the staffers for shuttling me around for the day.