If Obama wanted a Secretary of State whose primary focus was “Climate change”, he picked the right one in John Kerry, a true disciple of Gore and Mann, who cares little for science, and ignores the 15+ year pause in warming, ignores that most climate models fail, and is an utter climahypocrite. 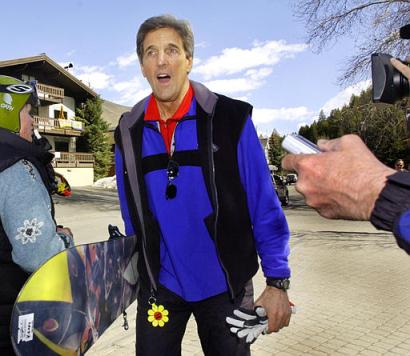 (NY Times[2]) Secretary of State John Kerry urged India on Sunday to begin to address climate change by reducing emissions of greenhouse gases even as it attempts to bring electricity to tens of millions of its citizens now living without it.

“I do understand and fully sympathize with the notion that India’s paramount commitment to development and eradicating poverty is essential,” Mr. Kerry said in a speech at the start of a two-day visit. “But we have to recognize that a collective failure to meet our collective climate challenge would inhibit all countries’ dreams of growth and development.”

Um, wait, what? Did he just say that fighting Hotcoldwetdry is more important[3] than lifting people out of poverty? Yes. Yes he did.

In an effort to prod the Indians to act, Mr. Kerry warned that climate change could cause India to endure excessive heat waves, prolonged droughts, intense flooding and shortages of food and water.

India, because of their geography, has been putting up with those pretty much since the Indian plate slammed into the Asian plate.

“The worst consequences of the climate crisis will confront people who are the least able to be able to cope with them,” he said.

But, if they build a few solar farms, wind turbine farms, and crops for ethanol (all which require massive amounts of land and defoliation), poor, starving people in India might get enough power to….well, they don’t actually have any appliances to need power, because they’re really poor. But, these kinds of 1st World measures will make people like John Kerry Feel Good about themselves.

Experts said at the time that such an effort would not be successful without the participation of India, where the use of refrigeration and air-conditioning is growing rapidly.

Well, some do have AC and refrigeration, which tend to be Good Things, especially that refrigeration, which allows food to be kept longer instead of spoiling. 1st Worlders like Kerry, who already have plenty of homes with AC and fridges, aren’t happy that 2nd/3rd worlders would like the same.

Plus all his fossil fueled vehicles.

His full speech[5] is here. I particularly like this part

I know that India is well aware of the grave threat that this global crisis poses. Yours is already one of the most severely affected nations. And unfortunately, the worst consequences of the climate crisis will confront people who are the least able to be able to cope with them. And I emphasize the imperative for us is to act forcefully and cooperatively on climate change, not because it’s about ideology, but because it is about science. And here in India, the home of so much of the history of science, we must recognize that today the science of climate change is screaming at us for action.

Yet, he still took a long fossil fueled flight to India. A standard economy flight from DC to India puts out a bit over 2 metric tons of CO2. Anyone think Kerry flew economy class? The average “carbon footprint” in India[6] is 1.16 metric tons. Anyone else see the hypocrisy?