Rigging the Vote: Obama Pushes Immigrants to Become Citizens Ahead of 2016 Election

That figures.[1] It’s just as I predicted. Obama is now doing a massive push to get what he is calling ‘immigrants’ to become citizens just in time for the 2016 election. Special emphasis is on the Latino and Asian vote. This could add millions of voters to the electorate and it is what the Marxists have been planning all along. This was their goal so they could stay in power indefinitely. And people wonder why Americans are so ticked that our borders have been erased and we have just allowed an invading horde to taken over our country. Now they want to say who will govern us. Screw that. This is why Trump is so popular. Americans want the border closed, a wall built and a moratorium on immigration until all of this can be addressed. A good place to start would be massive deportations. 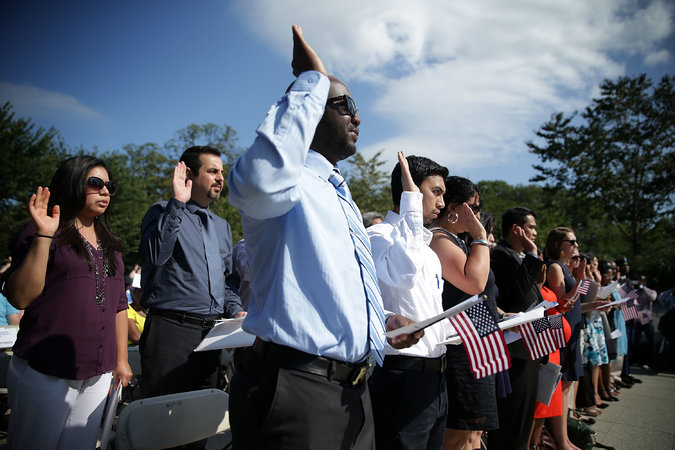 White House officials announced the start of a nationwide campaign on Thursday to encourage legal immigrants to become American citizens, which could add millions of voters to the electorate in time for the presidential election next year.

With about 8.8 million legal residents in the country who are eligible to become citizens, White House officials said they were trying to make it easier to complete the final steps to citizenship. The United States Citizenship and Immigration Services, the federal agency in charge of naturalizations, will offer practice tests on cellphones for the civics exam that immigrants must pass, but which many find daunting, and will hold preparatory workshops in rural areas. Applicants will also be able to pay the fee — still a hefty $680 — with a credit card.

The White House is working with regional immigrant groups to organize more than 70 citizenship workshops and about 200 naturalization ceremonies in the coming week alone. Four citizenship ambassadors have been named, including Fernando Valenzuela, the Mexican-born former pitcher for the Los Angeles Dodgers who recently became an American citizen after many years in the United States.

Also in the works are local initiatives to make immigrants feel more welcome, and a revision of Justice Department regulations that would make it easier for people who want to help immigrants naturalize to obtain credentials to provide basic volunteer legal assistance.

The officials said they had started the campaign this week because Thursday is Citizenship Day. But the White House is also aware of federal figures showing that about 60 percent of immigrants eligible to naturalize are Latino and about 20 percent are Asian, both groups that voted overwhelmingly for President Obama. Nearly a third of legal permanent residents eligible to naturalize are Mexican.

The campaign, which includes a blitz of television ads with a welcoming message for immigrants, gives President Obama a chance to set up a contrast with Republicans vying to succeed him. In the Republican debateon Wednesday night, Donald J. Trump, the real estate magnate who has been leading the polls among the Republican candidates, returned to his hard-line proposals that include building a wall along the length of the Southern border.

“We have a lot of really bad dudes in this country from outside,” Mr. Trump said, claiming that undocumented immigrants include many gang members and drug dealers. “First day, they’re going,” he said, referring to Baltimore and Chicago as places where deportations of criminals would begin.

Mr. Trump said he would deport all 11 million undocumented immigrants, then selectively allow some to return. Ben Carson, the pediatric surgeon who has seen a recent rise in the polls, also said he would consider mass deportation of all immigrants in the country illegally.

“If anybody knows how to do that, I would be willing to listen,” Mr. Carson said. “I think it’s worth discussing.”

The debate also highlighted the divide among Republicans themselves, with former Gov. Jeb Bush and Senator Marco Rubio, both of Florida, arguing against mass roundups and in favor of some path to legal status.

Mr. Obama’s citizenship campaign is part of a package of executive actions first announced in November. The most ambitious of them, a plan to provide protection from deportation and work permits to about five million undocumented immigrants, was challenged in a lawsuit by 26 states and has been blocked in the courts.

For now, White House officials have turned to the citizenship drive, which offers nothing for immigrants without legal status. To be eligible for naturalization, immigrants must have been legal permanent residents for at least three years and in most cases five years. The officials insisted the effort was nonpartisan.

Many groups collaborating with the campaign on training workshops are advocates who seek citizenship for undocumented immigrants as well and who have been alarmed by the tough tone of the Republican campaign.

“We want to build off the negative energy,” said Tara Raghuveer, policy and advocacy director for the National Partnership for New Americans, a coalition of immigrant groups that is holding dozens of events during the campaign. “People are hearing the hate and racist xenophobia on the national stage from the presidential candidates. They are angry and this is an opportunity for us to organize.”

Several Spanish language media outlets will be carrying Mr. Obama’s ads, including Univision, which has feuded with Mr. Trump.

Notice how Obama is painting those who want national security and to make America great again as racist xenophobes. Also notice that Obama’s media partner in this is Univision. I’m really learning to hate them. The immigrant groups tout their anger… but theirs is no match for the anger of America in general right now. What’s to stop millions of illegal immigrants fraudulently voting in the next presidential election? They could vote multiple times or from the grave. It’s all been rigged for them. The Democrats have set it up so that they don’t have to prove who they are. Rampant voter fraud will be everywhere if this is not addressed immediately. They’ve got the criminal vote going for them, now they are pushing legal immigrants to become citizens any way they can to bolster the vote as well. They are coaching them and babying them through the process. If you dig, I’ll bet some of their fees are being paid, which is illegal. The push is on to rig the next election – the question is, will America stand still for it this time?