Roger Ebert As Black Hearted as His Disease is Cancerous 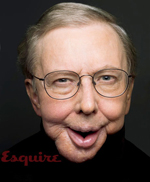 Proof of this is in the latest hatred that spewed from Roger Ebert’s keyboard over the Thanksgiving holiday. While everyone else was enjoying family and thanking God for their bounty, this black-souled, venom-spitting, hatemonger was taking a little time out of his holiday to wish ill on others. Worse he was doing so in the name of thanksgiving.

Today let us give thanks for the right of trial by jury. Especially Tom Delay’s jury.

Ebert’s horribly disfiguring disease aside — his entire mouth and throat has been eaten away by cancer to the point where he has lost the capability to speak — he has been incredibly fortunate in his life. He’s reached the pinnacle of a profession that has made him rich likely beyond what he ever imagined he’d see in his life, he’s had a long marriage to a woman that has stuck by him through all his worst days, and he’s been allowed a certain amount of celebrity in his own right.

But Roger Ebert is a foul man with no thankfulness in his heart for his own fortunes. Instead of finding Thanksgiving as a day to reflect on his own fortune, instead of using that one day a year for a bit of introspection, this black-hearted man used that day to lash out at a person he does not know and whose tribulations he has no grasp.

Now take just a minute and imagine for yourself what would be happening in the media right now if a conservative or Republican had taken the occasion of Thanksgiving to revel in someone else’s misfortune. What do you think the Old Media would be doing with this matter? Don’t you think that if a conservative had indulged such hatred the liberals would be calling for his head on a platter? His livelihood would be instantly threatened, his reputation shattered, and he’d be haunted by media leftists day and night until he arranged some grand apology session. And even that would not satisfy them.

But when a Hollyweird-like leftist engages in such spitefulness and hatred? Why that lib is patted on the back as a hale fellow well met.

Sadly Roger Ebert is as diseased of heart and mind as he is of body.

I pity him. He is a perfect example of what none of us should ever become. A hate filled liberal.