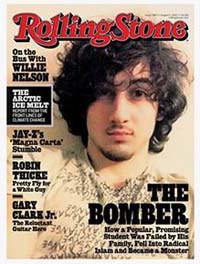 The cover of the August issue of Rolling Stone magazine won’t feature a rock star or actor. Instead, on August 3, fans will find a full cover photo[1] of Boston marathon bombing suspect Dzhokhar Tsarnaev.

The full cover image is the well-known self-taken portrait of the bombing suspect that shows the youth with a mane of tousled black hair surrounding a face studded with sparse fuzz and featuring a sly, partial grin floating above a headline that simply says “The Bomber.”

A subhead reads, “How a popular, promising student was failed by his family, fell into radical Islam and became a monster.”

The cover story is written by Rolling Stone contributing editor Janet Reitman. In the story she reveals[2] that “Jahar,” as his friends called him, once said that the attacks on America by Islamist terrorists on 9/11/2001 were justified.

Not everyone thinks this cover image is a great idea. Users of Twitter[3] and Facebook[4] condemned the magazine for glamorizing the accused bomber on its cover.

But Dzhokhar has his fans, to be sure. A flock of smitten young women, for instance, have frequently gathered outside[5] a U.S. District Court in Boston when the suspected bomber is there for appearances before magistrates. They’ve carried signs and worn t-shirt festooned with the suspect’s image.

Fans have also been using the hashtag “freejahar[6]” on Twitter to drum up support.

Meanwhile, several store chains have decided they will not be selling this particular issue and won’t have it on their magazine shelves.

CVS drug stores announced it would not sell the controversial August issue, and so did by New England-based grocery store chain Tedeschi Foods, as did Walgreens, Rite-Aid, and Kmart.

The magazine’s managing editor, Will Dana, waved off any criticism of his decision to put the murderer on the cover of the magazine. In an interview with NPR’s Melissa Block, Dana said the story and cover is par for the course for his magazine.

“I am completely comfortable about the decision that we made,” he said.

The magazine also released a statement on the matter that said in part:

“The cover story we are publishing this week falls within the traditions of journalism and Rolling Stone’s long-standing commitment to serious and thoughtful coverage of the most important political and cultural issues of our day,” continued the statement. “The fact that Tsarnaev is young, and in the same age group as many of our readers, makes it all the more important for us to examine the complexities of this issue.”