Former New York Mayor Rudy Giuliani is doubling down on his criticism of Barack Obama. Not only is Obama unpatriotic, not only does he not love America, but Rudy is also reminding everyone that Obama grew up being heavily influenced by communists. 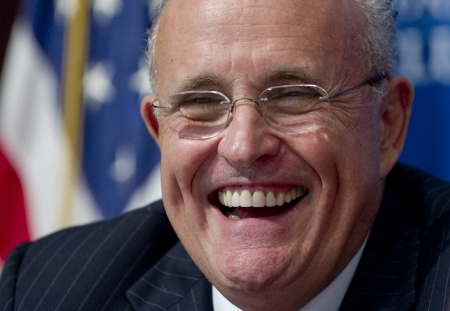 It is great the Giuliani isn’t backing off. He really is staying on point[1].

“From the time he was 9 years old, he was influenced by Frank Marshall Davis, who was a communist,” Giuliani told the New York Post. The former mayor also claimed that the “socialist” Saul Alinsky served as a major inspiration for Obama during his days as a community organizer in Chicago.

Giuliani also stuck to this previous comments that the president doesn’t love America, stating that Obama’s views reflect his spending “17 years in the church of Jeremiah Wright.”

“[T]his is the guy who said ‘God damn America, not God bless America,’” he stated to the Post. “Obama never left that church.”

“He was educated by people who were critics of the US. And he has not been able to overcome those influences,” Giuliani added.