Rush Limbaugh Is Not The Problem 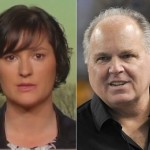 Have you seen the latest hit piece on Yahoo’s Destination 2012 web-site by David Crary of the Associated Press? Not surprisingly, this latest salvo is aimed directly at Rush Limbaugh. Contrary to the opinion being fostered by the institutionalized “progressive” left smear machine and their eager lapdogs in the “progressive” Party Pravda, Rush Limbaugh is not the problem.

Crary’s failed attempt at journalism is yet another premeditated, coordinated attempt by the institutionalized “progressive” left to portray Conservative refusals to submit to violations of their First Amendment Rights as an attack on all women. House Speaker John Boehner and Rep. Darrell Issa are but two prominent Republicans who have already fallen for that bait, hook, line and sinker.

Of course, the current White House occupant simply couldn’t resist the opportunity to come to the rescue. Somehow, bo managed to find time between wasting taxpayer money on failing green energy companies or flying off in Air Force One to a campaign fund-raiser to contact Fluke by telephone while she was waiting to go on MSNBC’s “Andrea Mitchell Reports”. What a guy!

When is occupy Oval Office going to denounce million dollar campaign donor Bill Maher’s calling Sarah Palin “a c*nt”? When is White House Press Secretary Jay Carney going to admit that the left is, at the very least, equally responsible for “The fact that our political discourse has become debased in many ways”? Were Fluke not an operative for the “progressive” left’s smear machine, she’d describe Maher’s remark as “really outside the bounds of civil discourse”. You can bet a $5 gallon that’s not going to happen.

This is not about contraception. This is not about a Conservative attack on all women. This is about the institutionalized “progressive” left’s agenda to silence dissent…after they spent 2000 to 2008 shouting from the rooftops that dissent is patriotic.

“progressives” are pathetic, forked tongued, two faced, back-stabbing, hypocritical liars who will do whatever it takes to steal the 2012 election. Conservatives aren’t taking that anymore.