Why is the Left suddenly so obsessed with eradicating Nazis? Do Nazis have a significant presence in this country? Are they a threat to democracy for the first time since 1945? Of course not. Nazis are a harmless historical relic, just like the Confederates liberals are so determined to erase. Except that to the Left, anyone who isn’t a leftist is a Nazi.

In a recent column for The Guardian, former Democratic senator for Wisconsin Russ Feingold clarified what all this controversy about white supremacists and Confederate statues is really all about: Republicans are Nazis.

“The lesson from Charlottesville is not how dangerous the neo-Nazis are,” he writes. “It is the unmasking of the Republican party leadership. In the wake of last weekend’s horror and tragedy, let us finally, finally rip off the veneer that Trump’s affinity for white supremacy is distinct from the Republican agenda of voter suppression, renewed mass incarceration and the expulsion of immigrants.”

Insisting voters present IDs so as to prevent fraud and enforcing drug and immigration laws = the Holocaust.

That’s why, according to the liberal media, cold-cocking a stranger for wearing a MAGA hat is the same as storming the beaches of Normandy.

As Saul Alinsky might say, Pick your target. Demonize it. Attack it in the streets. Eradicate it. 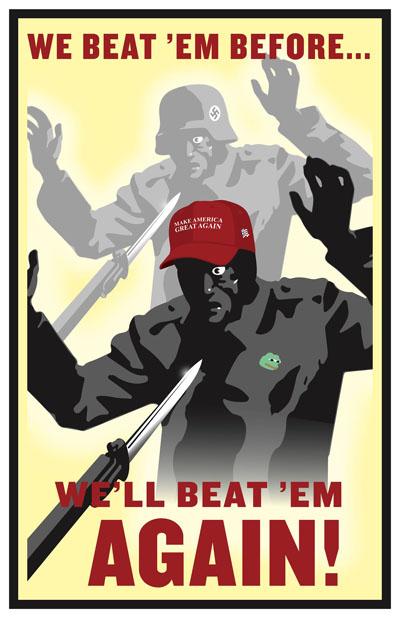 It isn’t just Antifa who wants us to think this way.