Sanders, O’Malley Cry Foul Over Debate Schedule – The Fix Is In For Clinton [Video]

It’s really hard for me to gin up any sympathy[1] for Socialist Sanders or Rain Tax O’Malley. And as much as O’Malley calls the Republican debates a reality show and screams how racist conservatives are, at least everyone running got a chance to debate. Not so much it would seem in the Democratic Party. Both Sanders and O’Malley are now claiming that the Democrats have rigged their debates to favor Hillary Clinton. It would seem the fix is in. Only six debates are going to be allowed. O’Malley says this has never happened before. It hardly sounds fair to the candidates as a whole. Are they delaying for a Biden entry? Are they delaying to protect Hillary? The New Hampshire debate was even scheduled at the height of holiday shopping so no one would watch it. Well, no one would anyway, but you get the idea. Limiting debate is fascist – it’s a typical Democratic ploy. 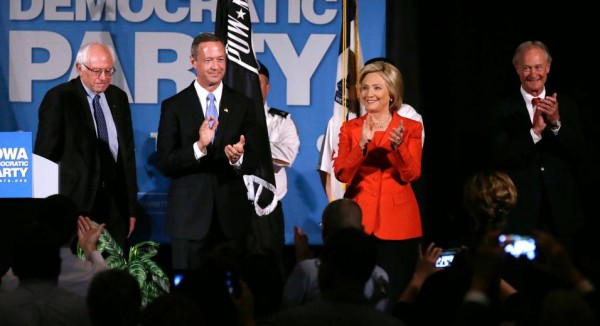 “Only four debates … before voters in our earliest states make their decision,” Martin O’Malley, a former Maryland governor, said at the Democratic National Committee’s summer meeting in Minneapolis. “This sort of rigged process has never been attempted before.”

O’Malley is particularly concerned about the party having just one sanctioned debate each in Iowa and New Hampshire, the first two states in which primary votes are cast.

“That’s all we can afford?” O’Malley asked. “Is this how the Democratic Party selects its nominee?”

He also argued that limiting the total number of sanctioned Democratic debates to six, including two after the Iowa and New Hampshire votes, is allowing the rhetoric of Republicans candidates to go largely unchallenged.

“Republicans traffic in immigrant hate,” said O’Malley, who has been critical of the debate schedule since it was announced in early August. “We need debate.”

However, he made clear to reporters afterward that he thought the schedule helps Clinton.

Fellow 2016 Democratic challenger Sen. Bernie Sanders, Vermont Independent, was also at the summer meeting and told The Washington Post that he agrees with O’Malley’s argument that the DNC has rigged the debate process.

Sanders has recently been gaining ground on Clinton, but he and O’Malley need debates to get out their message because neither has the estimates tens of million that Clinton has to spend on advertising.

And most political strategist think that frontrunners have the most to lose in debates because they are under attack by the challengers.

The wildcard in the Democratic primary is whether Vice President Biden enters the race.

Donors and other Biden backers have been ramping up efforts.

Josh Alcorn, senior adviser for the super-PAC Draft Biden 2016, told Fox News on Sunday that Biden has the potential backing but would have to enter the race before the first debate, Oct. 13, to catch up with the other candidates.

“He may not have the financial resources, but there is a ground swell of support,” Alcorn said. “I think having the vice president on that debate stage is an important part of the campaign.”

The DNC has said its candidates are being given ample opportunity to be on the same stage to debate, defending the schedule.

Clinton has 47.8 percent of the vote, compared to 26.3 percent of Sanders, 14 percent for Vice President Biden, 1.5 percent for O’Malley and 1.3 percent for former Virginia Sen. Jim Webb, according to an averaging of polls by the nonpartisan website RealClearPoltics.com.

This speaks to the corruption in the Democratic Party. But when you stand for virtually everything that is wrong and evil, you can hardly expect anything else. Sanders and O’Malley need the debates because they don’t have the millions to spend on their campaigns and advertising that Clinton does. The party knows this. O’Malley isn’t even really a contender, but Sanders is a threat to Clinton big time. This was O’Malley’s one chance to make waves and draw attention to himself and he took it. O’Malley never named the party’s chairwoman, Representative Debbie Wasserman Schultz of Florida, but his remarks about the debates were clearly aimed at her and she sat looking ticked off throughout his speech, barely clapping. While O’Malley has been deeply critical of the party for weeks over the debate schedule, this was a frontal attack on the party’s leadership from its own stage. He doesn’t have much to lose and many within the party agree with him. His charges were met with cheers. If this keeps up, the Republicans will win in an historic landslide as the donkeys implode.