Can we just take a moment to enjoy the Democrats destroying themselves from within? It truly is a work of art that is no more perfect than if it had come straight from the hand of Da Vinci himself.

If you all remember, during the 2016 election season, WikiLeaks released a series of emails that they claimed to show Hillary Clinton cheating Bernie Sanders out of the Democratic Presidential nomination. It prompted then DNC Chairwoman Debbie Wasserman Shultz to resign and Donna Brazile took her place in the interim. (There was also some speculation as to whether Brazile supplied Hillary Clinton with questions to a debate that CNN was hosting, but we’ll save that for later.) 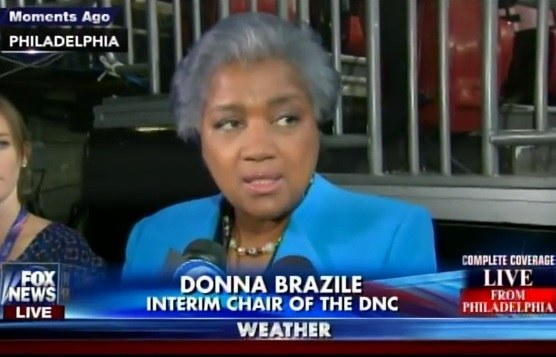 She published an op-ed in Politico that detailed her investigation into whether the DNC had improperly supported Hillary Clinton over other Democratic Presidential candidates and how she found out that Democrats are broke. Like, broke broke.

“When I was asked to run the Democratic Party after the Russians hacked our emails, I stumbled onto a shocking truth about the Clinton campaign,” Brazile wrote.

The truth? The Democrats put Hillary in complete control of the committee before Trump was ever elected President and Hillary was supposed to give them a monthly allowance to work off of.

Brazile called out Wasserman Shultz for her poor management of the Democratic Party.

“Debbie was not a good manager. She hadn’t been very interested in controlling the party — she let Clinton’s headquarters in Brooklyn do as it desired so she didn’t have to inform the party officers how bad the situation was,” she wrote.

“Her campaign had the right of refusal of who would be the party communications director, and it would make final decisions on all the other staff,” the op-ed continued. “The DNC also was required to consult with the campaign about all other staffing, budgeting, data, analytics, and mailings.”

But Clinton wasn’t the only one to drain the resources of the DNC. Former President Barack Obama also took his toll on their finances as well, with Brazile admitting that he left the party “$24M in debt.” She also asserts that Debbie made the problem even worse by refusing to shrink the staff between election cycles, as is common practice in both parties.

It was because of this improper relationship, which began at least a year before she started running for the Presidency, that Brazile believes the DNC cheated Bernie Sanders out of an honest shot at the Oval Office.