Losers. Paid, trolling, moronic union losers[1]. They couldn’t even be bothered to do a 1 minute Google search for the right address. Scott Walker smacked these Leftists silly three different times and won every time, yet they just keep coming back like a grotesque energizer bunny. These people are paid protestors who obviously don’t work for a living. They are getting paid to intimidate and threaten someone who doesn’t agree with the Left politically… someone they can’t defeat in a fair fight. Useful idiots for Marxist puppeteers. 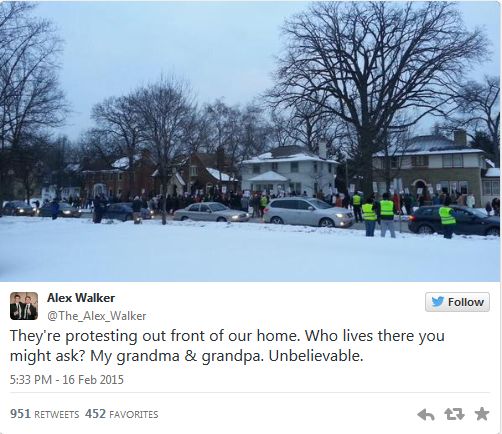 If you make an honest living, you had to work yesterday. These creeps didn’t. So they took a little field trip to intimidate people they don’t like.

Wisconsin’s Republican Governor Scott Walker has beaten the state’s unions three times in elections, recalls, and more elections. But the union thugs aren’t done attacking yet. They are now going so far as to harass Governor Walker’s elderly parents by unloading a bus of union toughs to protest outside the home in which they live.

On Monday evening, Walker’s son Alex tweeted that for some inexplicable reason, the union harassers unloaded buses where his grandparents live and targeted them for picketing.

Well, that’s what these two get for having a son who’s angering fascist morons across the country.

Then these disgusting union-paid goons got back in their buses, went home, and crawled under their damp rocks. And the people who hate Scott Walker have no problem with it. Hell, they’re applauding it.

Hey, if that’s how they want to play. Why not?

Oh, that’s right: We have jobs.

Looks like these fascist morons have their panties in a twist once again. They just can’t stand that Walker is even considering a run for the Presidency in 2016. They fear him just that much. I think Scott Walker has a real shot at it and he is unafraid of these creeps. He’s a fighter and could literally wipe the political ring with the likes of Clinton or Warren. I do love a scrapper. The joke’s on these Progressive twits… the more you poke the Walker badger, the more he’ll savage you. And he’ll do it with a smile on his face and with class. 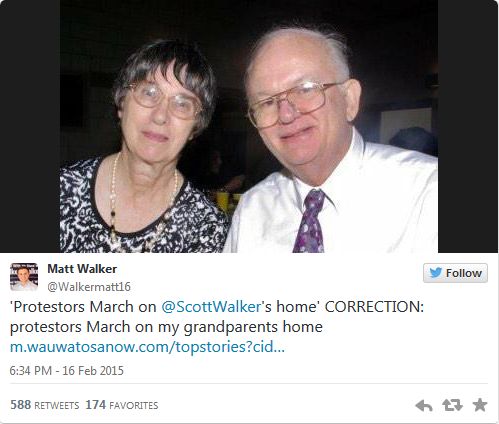