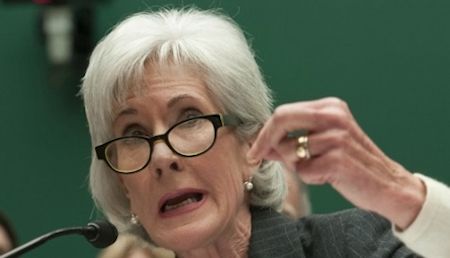 A congressional leader has warned Health and Human Services SecretaryKathleen Sebelius: that her testimony on Obamacare may result in: perjury charges.

“Witnesses who purposely give false or misleading testimony during a congressional hearing may be subject to criminal liability under Section 1001 of Title of 18 of the U.S. Code, which prohibits ‘knowingly and willfully’ making materially false statements to Congress,” House Oversight and Government Reform Committee Chairman: Darrell Issa, R-Calif., wrote in a letter Wednesday, according to the: Washington Examiner. “With that in mind, I write to request that you correct the record and to implore you to be truthful with the American public about matters related to Obamacare going forward.”

Issa honed in on the secretary’s testimony that there were no security issues associated with the exchange website, despite evidence to the contrary.

“Providing false or misleading testimony to Congress is a serious matter,” Issa said in the letter. “Documents and testimony obtained by the Committee, including information provided by Teresa Fryer, the Chief Information Security Officer at the Centers for Medicare and Medicaid Services (CMS), and the MITRE Corporation, a contractor hired by HHS to conduct security assessments of healthcare.gov, show that your testimony was false and misleading.”

Joanne Peters, the national press secretary for health care at the Health and Human Services Department, responded to Issa’s letter in an email to the Washington Examiner.

“Regarding the issues raised in the partial transcript excerpts referenced in the letter–as we have said repeatedly, including when these issues were first reported several weeks ago–the HealthCare.gov components that are operational have been determined to be compliant with the Federal Information Security Management Act, based on standards promulgated by the National Institutes of Standards and Technology,” the email stated.

Sebelius’ claim that MITRE conducted “ongoing testing” of the Obamacare website was false, Issa said, citing [Centers for Medicare and Medicaid Services Chief Information Security Officer Teresa] Fryer’s testimony to committee staff that the company only did testing by rounds, with the last pre-launch round taking place on Sep. 20. The next round did not begin until Dec. 10.

Issa also said that Sebelius’ claim that MITRE recommended HHS proceed with the launch of the website was also false, because MITRE says it was never consulted.

The Republican investigator also disputes Sebelius’ statement that “no one… suggested that the risks outweighed the importance of moving forward.”

In a Sept. 24 memo, Fryer warned that HealthCare.gov “does not reasonably meet the CMS security requirements,” saying she lacked confidence that personal information could be protected on the site.

The Department of Health and Human Services is disputing the security issues.

“There have been no successful security attacks on Healthcare.gov and no person or group has maliciously accessed personally identifiable information,” Peters said in her email to the Examiner. “An independent security control assessor tested each piece of the Healthcare.gov system that went live Oct. 1 prior to that date with no open high findings. All high, moderate and low security risk findings listed on the SCAs for the portions of the website that launched Oct. 1 were either fixed, or have strategies and plans in place to fix the findings that meet industry standards.”