Not only did Hillary lie about trying to become a Marine[1] and then getting turned down by a rude recruiter who said she was too old, a woman and too blind to join… twelve years ago there is photographic proof that she coerced a soldier into having to shake her hand for a photo-op. She’s all smiles in the photo, but if you look closely at the soldier’s left hand, you’ll see his fingers crossed. That’s the POW signal for coercion. Figures. Why the hell is brass ordering soldiers to take part in political propaganda? That’s disturbing. Gateway Pundit brought this to light over a decade ago and no one made a big deal of it. Maybe they should have. 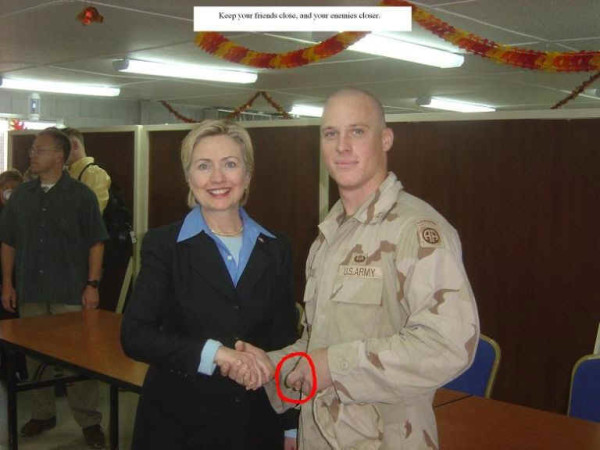 Hillary Clinton recently drew scrutiny for a claim that resurfaced in a New Hampshire breakfast on Tuesday that she once tried to join the Marines.

The dubious claim, which even implicitly accused the Marines of sexism, brings to mind another case of military optics that might not have worked out the way Mrs. Clinton wanted it: A photo of her taken while shaking the hand of a soldier.

The photo inevitably made the rounds in chain emails and on websites for years. But unlike some stories that seem too good to be true, and frequently turn out to be false, this one appears to have substantiation.

If you look at what the soldier is doing in the photo, he is crossing his fingers. Why is this significant? It’s the POW sign for “coercion.”

The Gateway Pundit explained[3] nearly a decade ago:

This US soldier flashed the “coercion” sign with his left hand when he met Senator Clinton while serving in Iraq in 2003.

The picture shows that this soldier has been through Survival School and learned his lessons well. He’s giving the sign of “coercion” with his left hand. These hand signs are taught in survival school to be used by POW’s as a method of posing messages back to our intelligence services who may view the photo or video. This guy was obviously being coerced into shaking hands with Hillary Clinton.

It also turns out people actually went through the trouble to find out who the soldier is (although his name is withheld for privacy reasons), and he had further clarified[4] what had happened in a singles ad:

“The picture of me and Hillary Clinton was taken when she came to visit Iraq. I was actually ordered to shake her hand, and I never figured that my friends would circulate it all over the net. I AM NOT a Hillary fan by any stretch.”

The story was also investigated by Snopes[5], which characterized the claim as True. The website notes:

The “not really all that pleased” assessment is evidently accurate — although the picture originally appeared without any accompanying text, and the “coercion” caption was only added later to make the humor of the photograph more explicit — as the soldier pictured with Senator Clinton (who asked that we not identify him by name) told us that he employed the gesture to indicate that he was not a fan of the senator’s and was not as appreciative of having the opportunity to meet (and pose with) her as it might otherwise appear.

When it comes to optics meant to shore up the former anti-war activist Hillary Clinton’s military credibility – from joining the Marines to dodging sniper fire to shaking hands with soldiers – there is all-too-often more to the story than meets the eye.

Snopes even verified the photo, not that I trust them implicitly since they are funded by Soros groups. But others have verified it as well and have even spoken to the soldier who does not want his name revealed. Can’t say I blame him there either. He did state bluntly that he was definitely not a fan of the Hildabeast. Right there with ya brother. I don’t find it funny, I find it alarming. Propaganda like this ordered by the military is done in our enemy’s countries, like Russia, China, North Korea and Iran. Not here. Hillary lied about joining the Marines, she lied about dodging sniper fire and she did a forced photo-op lie with this soldier. This woman will lie about anything and has. When it comes to the presidency, you’ve got to ask yourself, ‘Who ya gonna trust?’ It better not be the lying hag in the jumpsuit.