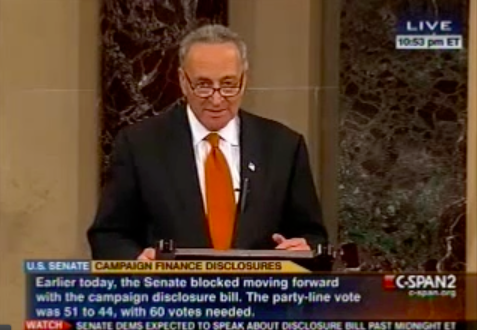 In another episode in the annals of American liberalism, progressives want to limit our First Amendment rights. : As George Will stated on This Week last February[2], “this is what liberalism looks like. This is what the progressive state does. It tries to break all the institutions of civil society, all the institutions that mediate between the individual and the state. They have to break them to the saddle of the state.”

The bill leading this discussion is the DISCLOSE Act[3], which would: “require certain tax-exempt groups involved in political advertising — which currently are not required to disclose the names of their donors — to release the names: of those who give donations of $10,000 or more.” : As such, Republicans blocked this bill and rightfully so. : There is not a mandate or a tax that Democrats find unpalatable.

Yesterday, on July 17th, The Blaze featured a video of Sen. Chuck Schumer: [4]who rose: to the podium to say[5]:

I believe there ought to be limits because the First Amendment is not absolute. No amendment is absolute. You can’t scream ‘fire’ falsely in a crowded theater. We have libel laws. We have anti-pornography laws. All of those are limits on the First Amendment. Well, what could be more important than the wellspring of our democracy? And certain limits on First Amendment rights that if left unfettered, destroy the equality – any semblance of equality in our democracy – of course would be allowed by the Constitution.